To Sunday: The exhibition focuses on Nam June Paik’s works related to cybernetics and artists influenced by the pioneer of video art.

The exhibits include Paik’s “TV Garden,” an installation of cathode-ray tube TV monitors among thick plants. It shows the artist’s visualization of nature’s energy waves in the images and sounds of television monitors, which relates to the concept of feedback in cybernetics.

The show features several of Deokhye’s belongings, including traditional dresses, jewelry and wedding gifts. They are on loan from the Bunka Gakuen Costume Museum and Kyushu National Museum in Japan to be shown to the Korean public for the first time. 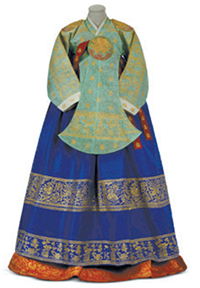 Deokhye was the daughter of Emperor Gojong and his concubine, Lady Yang. As Gojong’s only daughter, she was so beloved by the emperor that a royal kindergarten for her was established in the court. But as Japanese colonial rule strengthened, she was forced to study in Japan and marry a Japanese nobleman. The marriage ended in divorce as she developed a mental illness. She returned to Korea in 1962 and lived in a building of Changdeok Palace in Seoul until she died at age 78.

To Feb. 24: “Your Invisible Shadow” features elements such as light, shadows and sounds that will please viewers’ senses.

A room on the museum’s third floor is dark with luminous white silhouettes on its walls and ceiling. All the silhouettes in the work “Parallel World” by Lee Chang-won look mystical but actually originated from images taken by photojournalists.

On the second floor is artist Shin Sung-hwan’s “Bright.” It consists of a water tank with droplets falling at consistent intervals and the real-time projections of its images with rainbows formed on the walls.

The other work on the second floor is “Breathe” by Ha Won. It shows the image of a red dot projected on a screen made of white feathers.

The dot continuously pulsates in rhythm with with the sounds of breaths and heartbeats.

To April 14: Tim Burton, whose movies contain some of the industry’s most unique animation and visuals, has done a number of drawings, paintings and sculptures that are in his private collection.

Curators at the Museum of Modern Art (MoMA) in New York selected some of Burton’swork for an exhibition highlighting the American director and producer’s off-screen talent.

The result, the “Tim Burton” retrospective, has come to Seoul. The exhibition features 860 of Burton’s artworks, including drawings, paintings, sculptures, short films, animation and costumes.

Drawings not related to the movies but which reflect Burton’s trademark grotesque fairy tales and dark humor are also included.