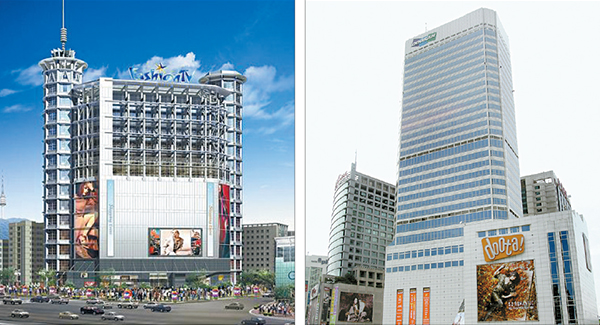 In the commercial district of Dongdaemun, the country’s fashion mecca and the biggest retail market for the latest fashion items, conglomerates Lotte and Doosan will confront each other to compete for supremacy.

The move comes as Lotte’s new shopping mall Fashion TV is set to open early this year in Dongdaemun market, where Doosan has previously dominated with its famous Doota mall.

Lotte is also reportedly planning to purchase the operating rights for Good Morning City, another fashion mall across the street.

Fashion TV is scheduled to open in March or April.

Lotte Asset Development signed long-term operating rights to Fashion TV last January after the 19-story building - 6 floors below ground and 13 stories above - sat empty after being completed in May 2007.

Merchants didn’t want to do business in the mall because rents were high.

After Lotte acquired the lease, it renovated the 18,500 square meters (199,132 square feet) of commercial space, spending 5 billion won ($4.74 million). It is leasing three stories below ground and eight above ground. The mall will introduce 200 designer boutiques, electronics shops, plus food and beverage outlets.

Lotte signed a memorandum of agreement (MOA) with Good Morning City in January 2011, but the deal hasn’t been consummated.

The MOA stipulated that Lotte will acquire Good Morning City operating rights when it receives written consent from 95 percent of 3,000 people holding part-ownerships of Good Morning City. But it’s only received 93.5 percent.

Lotte likes Good Morning City because it is 1.6 times bigger than the rival Doota mall operated by Doosan, and also has the subway station directly connected to the building.

“We hope to make Dongdaemun the No.1 fashion town in Northeast Asia with our 30 years of retail know-how,” said Kim Chang-kwon, CEO of Lotte Asset Development, last September at a press conference.

Doota shopping mall, operated by Doosan Tower Corporation under Doosan Group, has successfully established itself as Dongdaemun’s fashion center since it first entered Dongdaemun in 1999.

“When comparing Doota and Fashion TV, Doota is much larger in terms of size,” said a spokesman at Lotte Asset Development. “It might be difficult for Fashion TV to see sales equivalent to that of Doota mall, but by Lotte entering into the Dongdaemun commercial district, we expect there will be a synergy effect in realizing our goal of developing Dongdaemun into Asia’s No.1 shopping district.”

“In the case of the Fashion TV, the building has adrift, not being able to open even after its construction was completed,” said a spokesman at Doosan Tower.