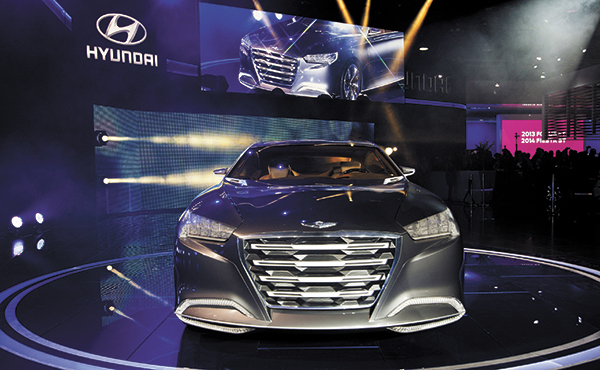 Hyundai Motor presented a glimpse of its design direction for its premium vehicles at the 2013 North American International Auto Show (NAIAS) yesterday as the nation’s largest automaker hopes to grow in the luxury segment.

At the Cobo Center in Detroit, Hyundai showcased 19 models including a world premiere of the HCD-14 Genesis concept car. The rear-wheel-drive four-door coupe hints at future designs for the premium model, according to the carmaker.

“We instilled HCD-14 Genesis with a premium-sport 4-door coupe road presence,” Christopher Chapman, chief designer of Hyundai Design North America, said in a release. “Its sleek and lightweight silhouette does not punish the wind, but uses fluidic precision with dramatic surfacing that conveys natural restraint.

Hyundai Motor has been emphasizing the importance of design as part of its business plan to improve its quality and image.

The world’s fifth largest automaker reinforced its design unit after appointing Peter Schreyer, former Volkswagen and Audi designer, as the chief design officer of both Hyundai and Kia. The 59-year-old German, who became the Korean automotive group’s first foreign president, was previously in charge of designing models for Kia Motors, Hyundai’s smaller affiliate.

Hyundai said that aside from design, its luxury concept will introduce cutting-edge technologies, such as eye-tracking and gesture-based controls.

According to Hyundai, ergonomics engineers eliminated the traditional center stack, developing an intuitive driver interface system that allows the HCD-14 driver to better keep his eyes on the road.

The driver of the future will be free from the distractions associated with manual controls. Once a specific feature is selected via eye-tracking, thumb controls or gesture recognition can be used to select navigation, infotainment, audio and even smartphone connectivity functions.

Hyundai said the HCD-14 Genesis is the product that demonstrates the company’s intention to produce a rear-wheel-drive premium vehicle and push steady sales of its Genesis and Equus sedans globally.

Last year, Hyundai’s high-end models saw a 24 percent sales increase outside Korea compared to the previous year. In the Middle East, combined sales of Equus and Genesis models reached 4,132 units, an increase of more than 45 percent from 2011.

In the United States, the company’s largest luxury market outside of Korea, Hyundai has been steadily improving its reputation as well.

The Genesis was chosen as the 2009 North American Car of the Year, while Hyundai’s Equus, which was launched in 2010, beat out competitors like BMW and Mercedes-Benz to take first place in the luxury car segment at the Strategic Vision Total Value Awards last year.

“We’ve departed from industry convention in many of our premium product, marketing, sales and service approaches, and it’s worked out pretty well,” John Krafcik, president and CEO of Hyundai Motor America, said. “Genesis and Equus are now delivering a 9 percent retail market share in their premium segments, higher than the 5 percent retail share Hyundai achieved in the overall industry.”

Meanwhile, Hyundai also exhibited its first Plug-in Hybrid Electric Vehicle (PHEV) system at the show, aiming for mass production in the future. The mid-size PHEV runs 32 kilometers (19.8 miles) on a single charge in all-electric mode, and the battery can be fully charged at home in about three hours, according to the Korean automaker.

At the motor show, which runs until Jan. 27, Hyundai was not the only manufacturer to show luxury concept cars.

From an ultra-fast Bentley cabriolet to a completely redesigned Chevy Corvette to a clutch of new BMWs and Audis, car makers at the Detroit auto show were confident that lower-volume, higher-margin cars would find buyers in the coming year despite the slow global economy and the recession in Europe.

Automakers are also increasingly taking aim at younger buyers no longer seen as bound to their parents’ brands and - according to Infiniti chief Johan de Nysschen - not wedded to the idea that only the Germans get it right.

GM’s new Corvette was the one of the most hotly anticipated debuts of the show.

Dubbed the Stingray, a name Corvette used for its iconic 1963 model, the quintessential 60-year-old American sports car nevertheless had an “Italianate” feel in its complete makeover, its first in eight years, said one auto analyst.

“The soul of our company is sitting right here in Corvette,” GM North America president Mark Reuss said. “This car is the reason I work at GM.”

Daimler also offered a sneak peak at an entirely new car, the compact, stylish and lower priced Mercedes CLA coupe, which is aimed squarely at the youth market.

Cadillac’s electric touring coupe the ELR was a fresh bookend to the ATS gas-engined sedan introduced last year, which pulled in the North American Car of the Year award in this year’s Detroit show.

Lincoln showed its MKC, a luxury compact sport utility vehicle billed as a concept car that looked not too far from production.

But luxury wasn’t everything: the global battle is still on among the moderately priced cars which make up the bulk of sales, numbers released Monday showed.

Toyota regained the world sales crown lost when the 2011 Japanese tsunami devastated its supplies, as rival General Motors saw its share of the global market shrink.

At the show, Toyota offered a concept car, the Furia, which seeks to deliver the styling lines and some of the bells and whistles of premium level cars to the humble, long-lived Corolla, to better fend off challenges from low-cost models from Korean and U.S. producers.

“The Corolla Furia Concept is an early indicator of where our compact car design may lead in the future,” said Bill Fay, general manager of the Toyota’s U.S. division. “It blends a heightened emphasis on dramatic design and modern elements of high technology to generate curb appeal that will surprise a lot of people.”