Is the iPhone 5 not meeting sales expectations in Korea?

Is the iPhone 5 not meeting sales expectations in Korea? 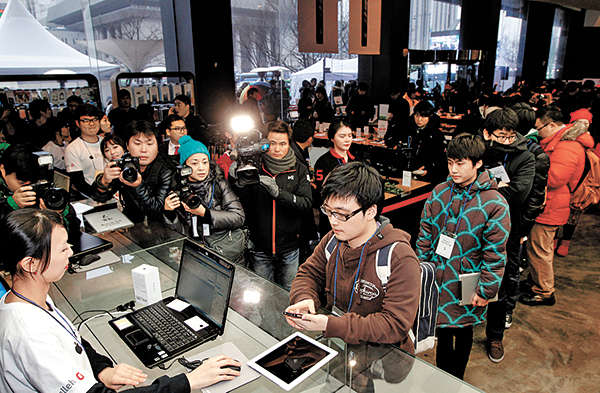 Customers line up to buy Apple’s iPhone 5 at KT’s Olleh Square in Gwanghwamun on Dec. 7, 2012, the first day of its sales in Korea. KT and SK Telecom expected the new Apple smartphone would sell over 1 million in a month but the sales are estimated to have reached only 500,000. By Kim Seong-ryong


The rumor that an iPhone 5 with 16 gigabytes of storage was selling for 199,000 won ($188) - versus a normal retail price of 814,000 won - made headlines in Korea Monday as SK Telecom, the nation’s top mobile carrier, launched promotions over the weekend with hefty subsidies to attract subscribers.

The yet-to-be-confirmed rumors may ignite more controversy over mobile carriers’ wild, and wildly inconsistent, policies on subsidies policies. Only four months ago the carriers caused confusion and anger among consumers as they embarked on Internet-based spot sales of Samsung Electronics flagship Galaxy S3 at as low as 170,000 won, although its original retail price was 994,000 won.

The Apple rumors came only a week after three local carriers were punished by the Korea Communications Commission for overdoing it on subsidies between July and December last year. The KCC said the subsidies to Galaxy S3 buyers was unfair to previous customers. As punitive measures, the carriers were suspended from attracting subscribers for different periods of up to 24 days and handed fines.

According to news reports, several Web sites were offering to sell 16-gigabyte iPhone 5s at 199,000 won sporadically from Friday until Sunday on the condition that the new customer subscribed to SK Telecom plans for at least two years. The customer would pay for the new device on a monthly installment plan on top of a monthly bill.

The successor to iPhone 4S went on sale in Korea on Dec. 7, almost three months after its debut in the United States and many other countries around the world.

Should the promotion - unprecedented for Apple, which has been too proud to trim the price of its most up-to-date product - turn out to be true, the subsidy from SK Telecom amounts to 615,000 won, more than double the maximum allowed by the Korea Communications Commission, the state regulator. In Korea, mobile carriers are allowed to provide flexible amount of subsidies depending on the sales status of different mobile gadgets, and the regulator has set subsidy ceilings to prevent excessive competition and unfair trade.

SK Telecom says it is looking into whether the promotions actually took place, denying allegations that it led them. “We are now checking respective stores and there is a high chance only a few held the event to spur sales,” said its spokesman. “But it surely is not a collusion like the one with the Galaxy S3.”

The promotion comes amid worse-than-expected local sales of the iPhone 5. Although neither Apple Korea nor SK Telecom and KT, the two carriers selling Apple phones here, refused to provide sales data, only 500,000 units are estimated to have sold in a month. The two carriers were expecting the new phone would see at least over 1 million units sales in the first month.

The sluggish performance of iPhone 5 is mirrored in researcher Strategy Analytics’ forecast. It predicts Samsung Electronics will sell 290 million smartphones - including its currently hugely popular Galaxy S3 and Note 2 models - this year globally versus iPhone sales of 180 million.

Meanwhile, shares in Apple dipped below $500 for the first time in almost one year after reports it is slashing orders for screens and other components from its Asian supplier as intensifying competition erodes demand for its latest iPhone. Apple stock slid more than 4 percent to an intraday low of $498.51 - a level not seen since Feb. 16, 2012 ? before bouncing back to trade just above $500 at midday.

Japan’s Nikkei reported Monday that the world’s largest technology corporation began sharply reducing purchases of liquid crystal displays about a month ago from suppliers like Japan Display and Sharp.

Japan Display, a state-run business formed from the small LCD units of Sony, Toshiba and Hitachi, declined to discuss its orders. The Nikkei report, later matched by the Wall Street Journal, comes as hard-charging rivals like Samsung Electronics, which makes phones based on Google’s Android software, continue to expand market share globally.

Apple has asked Japan Display, Sharp and LG Display to roughly halve supplies of LCD panels from an initial plan for about 65 million screens in January-March, the Nikkei reported, citing people familiar with the situation.

Some analysts argued that Apple and its manufacturing partners had struggled with quality issues that might have curtailed production times.

Dogged by low production yields, Sharp last year fell behind schedule for iPhone 5 screen shipments in the run-up to the phone’s launch in September. Sharp has yet to acknowledge that Apple is a customer.