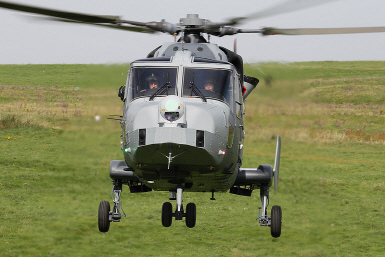 South Korea selected a European model of military helicopter for its maritime weapon acquisition program, declining a U.S. aircraft believed to be superior but more expensive.

Between 2015 and 2016, South Korea will purchase eight multi-use, anti-submarine helicopters to be installed on Aegis-equipped warships in order to tighten up surveillance on North Korean submarines.

Roughly 600 billion won ($567 million) will be invested in the program.

Starting from June, the state-controlled defense procurement agency has conducted research on the two helicopters and made the final decision at a meeting led by Kim Kwan-jin, minister of national defense, yesterday.

“We evaluated them based on the evaluations of 13 helicopter experts on four standards: expense, capability, operational suitability and contract conditions,” Baek Yun-hyeong, a spokesman for the Defense Acquisition Program Administration, told reporters at a briefing yesterday.

“The negotiation took longer than scheduled, leading to a postponement of the decision.”

“Through this purchase, now we will begin to incorporate high-end technology of advanced helicopters, such as sonar devices,” Baek said.

Until now, expectations were high that the American model, equipped with armored capabilities and engines superior to those of the British one, would be selected.

“As far as I know, the Seahawk didn’t meet the price conditions [proposed by the government],” a military source told Yonhap News Agency.

Eyes are now on how declining the U.S. offer will impact the bidding for the $7 billion procurement project of next-generation fighter jets, with two U.S. aircraft on the list.