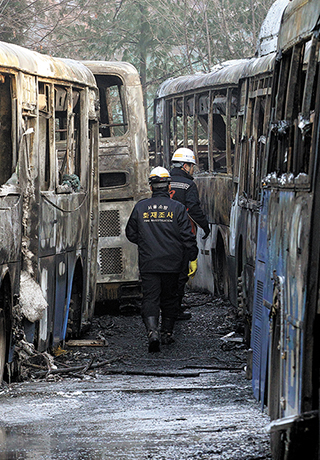 Investigators walk by burned buses yesterday at a storage yard in Gangseo District, western Seoul, to find the cause of the fire that caused a delay on routes from Yeongdeungpo to Yeouido in western Seoul. By Kim Do-hoon

A fire in the middle of the night at a bus storage yard in western Seoul burned nearly 40 buses, disrupting some bus routes in Seoul and causing inconvenience to workers trying to get to work a few hours later.

Thirty blue city and green village buses parked in a yard in Gangseo District, western Seoul, were destroyed in the fire while another eight were partially damaged. There were 85 vehicles owned by the private Youngin Transportation Company in the yard. The total damages were estimated at 1.5 billion won ($1.4 million).

The police are not ruling out arson. “Given the location is not a crowded residential zone but a wide open area exclusively for parking with no confirmed inflammable elements, there is a possibility the buses were torched,” said detective Lee Geun-wha from the Gangseo precinct.

The fire prompted the Gangseo Fire Department to dispatch 176 firefighters in 57 fire trucks. It took them one hour and 45 minutes to extinguish the blaze. There were no casualties.

The torch led to a delay of some buses on four routes linking Yeongdeungpo and Yeouido in western Seoul by up to 15 minutes yesterday, according to the Seoul Metropolitan Government, as only 43 buses were operating instead of the normal 72. The city government said the bus schedule will return to normal today.

The police are analyzing footage from CCTVs around the area.