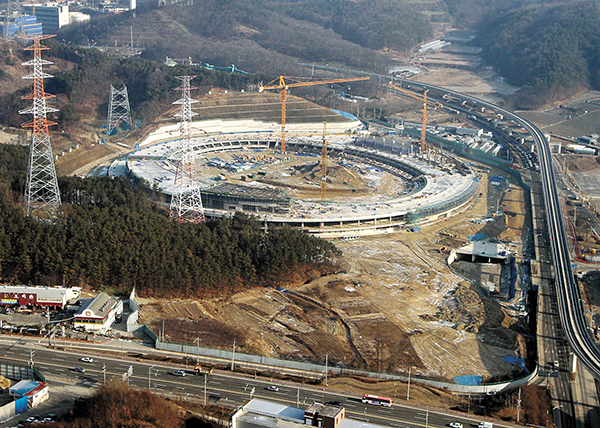 An aerial photo of a construction site to build a stadium which can accommodate 37,000 fans in Yongin, Gyeonggi. Provided by Yongin City Government


In an area next to Highway 42 that connects Yongin and Yeoju, southern Gyeonggi, three tower cranes busily carry construction materials at a large construction site designated for a multi-purpose athletic complex.

The plan for the stadium was released in 2004 by the Yongin City Government. It aimed to create a multi-purpose athletic area for several sports such as track and field and swimming, so they could host international and domestic athletic events.

It also planned to create a large camping area around the stadium.

They claimed that the development is necessary as the population in the region has also rapidly increased in the last decade, from 150,000 to 960,000 as of 2012.

The plan, however, became controversial in 2011 as the city government fell into financial hardship due to the 18.5-kilometer (11.5-mile) light rail line system connecting the city to the Bundang Line that was finished in July 2010.

As the city government is saddled with debt of 770 billion won from the project, they could not provide funds to manage the stadium either.

The line’s opening was delayed because Yongin questioned the feasibility of the service and its safety, but the truth is they failed to pay money they owed to Yongin Rapid Transit, the operator of the light rail.

A suit was filed in February 2011 by the operator which went to the International Court of Arbitration, because one of the chief investors in the project is Canada’s Bombardier Advanced Rapid Transit.

The arbitration court ordered Yongin to pay the operator 515.3 billion won in October.

The city government is negotiating with the operator to delay the payment.

The stadium also will not have a chance to host a large scale international athletic event such as the FIFA World Cup, Olympics, or Asian Games in the next few years.

It has a high possibility of becoming another white elephant for Gyeonggi, just like the Hwaseong Sports Complex in Hwaseong, which was completed in October 2011 by investing 236.9 billion won.

The stadium can accommodate up to about 35,000 fans but it only has hosted two international soccer matches since it opened.

The Yongin City Government, which was once subject to fierce criticism for building a fancy headquarters office and poorly managing the hundreds of billions of won light rail line construction project, came under fire again as it planned to spend additional hundreds of billions of won to build unnecessary entertainment facilities and buildings for its affiliated organizations.

On Tuesday, the city government announced its plan to build local offices that will manage civil complaints in eight areas, including Singal, Dongbaek, Giheung, and Mabuk-dong at a cost of 124.4 billion won, as well as two community centers for elderly and child care service centers.

The city government said most of the local office buildings will be constructed as two- or three-story buildings and all the construction work will be finished by 2015.

“We worry about wasting taxpayer money again because similar facilities already exist around the area,” a high-ranking official from the city government said.

In 2006, the city government was strongly criticized after it spent 162 billion won to build its new and fancy 16-story headquarters’ office building in an area about 80,000 square meters (861,113 square feet) large.