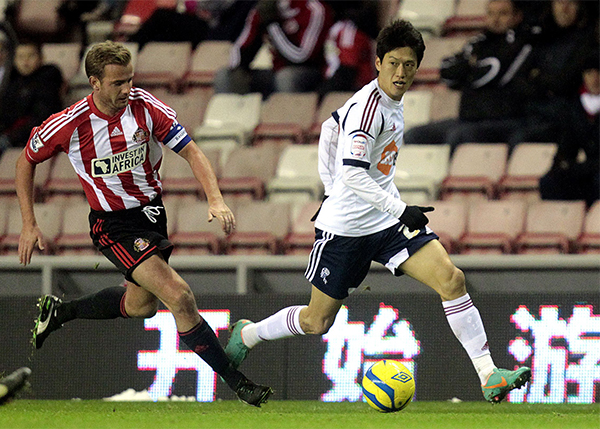 LONDON - Premier League struggler Sunderland was eliminated from the FA Cup by second-tier club Bolton on Tuesday as Fulham, Stoke and Wigan beat lower-league opposition in the third-round replays.

Marvin Sordell scored twice in the second half at Sunderland - the first from the penalty spot after Jack Colback fouled Darren Pratley - to give Bolton a 2-0 victory and fourth round meeting with Everton.

“We need to start getting some consistency to our game,” Sunderland manager Martin O’Neill said. “We’re going to have to get it. This is a big club and we shouldn’t be spending 40 years without winning something, we really shouldn’t.

“We didn’t take anybody lightly here tonight, we just got beaten because we didn’t create enough chances in the second half. I know some people field weakened sides but we didn’t.”

Bolton’s victory saw American midfielder Stuart Holden play his first game in 16 months and only his second in 22 months, coming on in the second half after returning from knee surgery.

“It felt amazing to be back out on the field doing what I love again,” Holden said in an e-mail to The Associated Press. “All the hard work over the past year during some really tough times prepared me well for this moment. Onwards and upwards from here, the work doesn’t stop now. It’s only the beginning of the next step to playing every week!”

Fulham was also forced into extra time by Blackpool but Brede Hangeland’s late header clinched a 2-1 victory. Fulham was heading out until Kieran Richardson scored in the fourth minute of second-half stoppage time to cancel out Nathan Delfouneso’s goal for Blackpool.

Fulham will next face the winner of the replay between Manchester United and West Ham on Wednesday.

In the fourth round Wigan is at fifth-tier nonleague club Macclesfield and QPR hosts third-tier outfit MK Dons, which beat Sheffield Wednesday 2-0 in its replay.

Leeds will welcome Premier League opposition to Elland Road for the fourth time in cup competitions this season after the second-tier club came from behind to beat Birmingham 2-1 and set up a meeting with Tottenham.

QPR manager Harry Redknapp was delighted with his side’s 1-0 win in their FA Cup third round replay at West Brom on Tuesday, which came courtesy of Jay Bothroyd’s late header and a string of vital stops from goalkeeper Rob Green.

While many believed the London club was destined to be sent straight back down to the Championship (second division), QPR have started to claw their way toward league safety and the 1-0 win at West Bromwich Albion on Tuesday put them in the next round of the Cup.

With Olympique Marseille striker Loic Remy and Rennes midfielder Yann M’Villa reportedly set to sign for the club, Redknapp believes QPR are on the right track.

“We’re picking up some good results now and some clean sheets. We’re getting the best out of the team at the minute,” Redknapp was quoted as saying on the club’s Web site. “There are areas that I’d like to improve on, but I can’t fault the effort of the players.” AP, Reuters