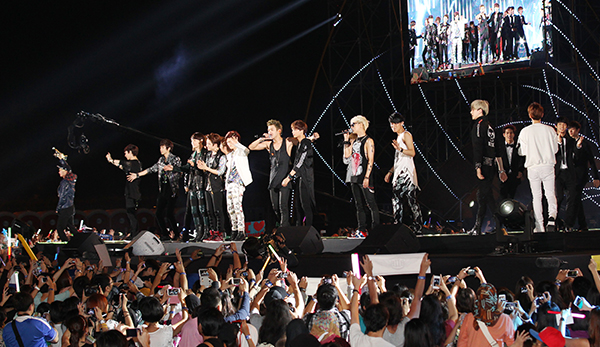 
K-pop fans in Malaysia were in for a treat as the biggest names in K-pop descended on their turf, some flying in as early as Sunday to get ready for the 27th Golden Disk Awards, which took place from Tuesday to yesterday evening.

More than 25 major acts took part in the two-day event, often dubbed the “Korean Grammys” and meant to recognize both record and online sales.

The event took to a foreign location for the second-time running, even further away from home this year as the Korean Wave reaches shores across the continent. Last year’s event took place in Osaka, Japan.

Co-hosted by JTBC and Ilgan Sports and sponsored by Samsung, the awards saw best-selling artists like SHINee, Infinite, Super Junior, KARA, 4Minute, Sistar, FT Island and CN Blue recognized for their achievements in the past year.

The excitement really got going on Monday afternoon when there was pure madness at Kuala Lumpur International Airport with Super Junior, Infinite, KARA, 4Minute and others touching down, bringing some 1,000 fans out to greet the stars.

Even airport personnel couldn’t resist. Ten security guards tasked with protecting 4Minute’s Hyun-a were quick to abandon their jobs to take pictures of the girl group member in short shorts.

And on Tuesday evening, the singers were greeted by yet another throng of screaming fans on the red carpet before the awards show.

There was no way to calm the fans, who came from Singapore, Indonesia and throughout Malaysia despite the sweltering heat that dipped over 33 degrees Celsius (91 degrees Fahrenheit), chanted their favorite artists’ names and held placards written in Korean.

From 7.30 p.m., KARA’s Nicole and CN Blue’s Jung Yong-hwa hosted the three-hour show in front of 15,000 people on the evening dedicated to record sales.

During the medley of performances and prize-giving, Super Junior was handed the Grand Prize for the third consecutive year. This year, it won for “Sexy, Free & Single.”

“We are here because of your love,” the group said to the fans before giving shout-outs to Lee Soo-man, the founding chairman of SM Entertainment; CEO Kim Young-min; and absent leader Leeteuk, who is currently serving in the Army.

By taking home the prize yet again, the band set a record alongside Kim Gun-mo, Girls’ Generation and Jo Sung-mo.

In total, the boy band secured three trophies during the evening, adding the Main Prize and the MSN Southeast Asia Award to their prize chest.

The show dedicated to online sales records began yesterday evening with international media including The Associated Press and Reuters covering the event.

Online, fans at the show posted comments at real time raving about the show to hundreds of others following via Facebook.

Korean viewers will be able to see the show through JTBC on Saturday at 11 p.m.