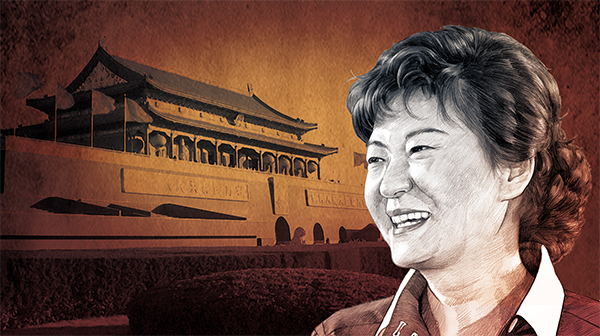 The Chinese are down-to-earth people. They do not mind who becomes the president of South Korea as he or she holds the power. And Beijing has been highly approving of President-elect Park Geun-hye and it isn’t just being polite.

There are four clear reasons why Beijing likes Park. The parsing could help understand the Chinese better and be applicable for Korean businessmen when they do business with the Chinese.

Park’s family background sells well with the lineage-obsessed elite class of China. To the Chinese, Park is a political royal. The Chinese communists toppled the monarchy. But deep in their psyche, they are not totally free from feudal tradition and customs.

At informal dinners, the Chinese often say if Mao Anying, the eldest son of Mao Zedong, had not died during the Korean War, he could have become the leader. The Chinese media raise a lot of hoopla about the family tree of their leaders. When Zhu Rongji became the prime minister, Hong Kong media dug up his family records and traced him as a descendent of Zhu Yuanzhang, founder of the Ming Dynasty.

China’s new leader Xi Jingping also enjoys status from his family name. He is always accompanied by the explanation that he is the son of Xi Zhongxun, one of the founders of the Communist guerrilla movement, a revered politician and a former vice premier.

Why are the Chinese so infatuated with family lineage? Those from a good family are pressured to live up to their family name, and citizens tend to expect ingenuity and extraordinariness from leaders of a formidable background. Common people are comfortable with being common, as they were not born that way.

We could employ this Chinese mindset in business practice. When dealing with the Chinese, Korean businessmen should try to make them see their companies as extraordinary, better and special. The pitch on corporate history and lineage can attract special attention from the Chinese.

Secondly, proficiency in the Chinese language is a plus. Former lawmaker Gu Sang-chan - who is not fluent in Chinese but regarded as one of the most versed in Chinese affairs among Korean politicians - said that Park deftly translated between Wang Jiarui, director of the International Department of the Communist Party, and him when three of them were left in the elevator during a business trip to Beijing.

Thirdly, the Chinese are also particular about modesty. Chinese history has been plagued with foreign invasions since the 1840 Opium War. The Chinese get touchy when Western society raises concerns about their rise. They still suffer from self-consciousness and victim mentality.

The Chinese lose their calm and get emotional when they feel they are looked down upon. It has to do with their deeply-seated tradition of valuing their “mianzi,” (face or reputation). Park has earned favor with the Chinese because of her humble propriety. It is not difficult to score points with the Chinese if one knows how to play up their ego. One businessman I know has never paid a fine for breaking traffic regulations. He knows a trick. If he is stopped by the traffic officer, he lowers the window and politely hands over his driving license with two hands, he advises. He stammers his Chinese to show that he is a foreigner. The onlookers then cry out “Let him go. He’s a decent foreigner.” The officer, satisfied with the respect he got from a foreigner, gives a short lecture on traffic regulations and lets him go without a ticket.

Finally, first impressions are important to the Chinese. There is an old saying in Chinese that “The good does not come and those who come are not good,” suggesting the Chinese knee-jerk suspicion toward the alien and foreign. But good impressions can break the ice.

The Chinese regard Park as elegant and noble. I remember Bo Xilai, former secretary of Communist Party’s Chongqing Province who fell from prominence due to a high-profile scandal, asking Korean politicians how they cared for their hair during a trade conference while he was a mayor of Dailian in the 1990s. The Chinese love to watch Korean soap dramas on TV. They like the actors and actresses, but are obsessed with their styles in fashion, hair and makeup. When one meets the Chinese, one should be particularly attentive to their appearance.

If one is well-groomed and modest, the deal with the Chinese is half-done. To succeed at the other half, one has to be skillful in bargaining on mutual interests. The Chinese are mostly no-nonsense, and quid pro quo is essential in doing business with them.

The same goes for foreign policy. Park has already won the heart of the Chinese. How she can improve ties with Beijing depends on her prowess in the real game by making the right moves. She would have to work on a win-win strategy with the Chinese.