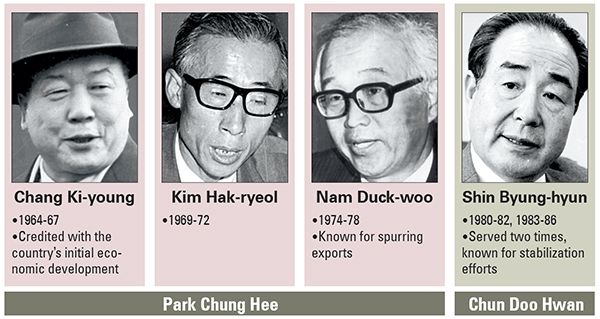 The incoming Park Geun-hye government aims to tackle a myriad of economic issues by empowering the Minister of Strategy and Finance to serve as the country’s deputy prime minister for economic affairs.

Also, it wants to keep the country’s position as the world’s eighth-largest trader by merging the Trade Ministry into the Ministry of Knowledge Economy.

These changes in the administration structure were announced by Park’s transition team on Tuesday.

The deputy prime minister position was abandoned by President Lee Myung-bak five years ago. President-elect Park restored it because she considers current economic issues, including low growth at home and abroad, as difficult challenges for the next five years.

“There was some criticism within the transition team about the position because some former deputy prime ministers were criticized for not doing their job properly,” one of the transition team members told the JoongAng Ilbo. “However, the team agreed on the importance of resolving economic issues and decided to restore the position.” 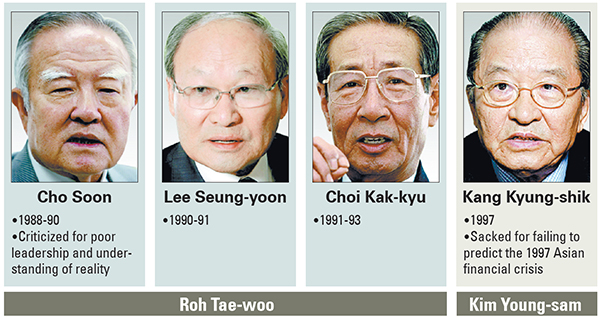 There are three big tasks for the country’s new economy chieftain: Addressing vulnerabilities of the local economy, including rising household debt, sluggish consumption and a lengthy slump in the property market, coping with the global economic crisis and raising the country’s low growth rate and fine-tuning taxation and budget plans.

For the past five years, in the absence of an economic chief, the Korean economy underwent a tough time, suffering both internal and external problems. The U.S.-triggered financial crisis first hit the Korean economy in 2008, severely denting the profits of local businesses that are reliant on exports.

Korea managed to bounce back. But then it was hit by the euro zone crisis in 2011, causing companies to cut back on investments and employment, which has led to a contraction in local consumption.

Low growth is considered the most serious task for the next government. The World Bank released a forecast yesterday that the global economy would grow by 2.4 percent this year. The Finance Ministry earlier predicted the Korean economy would be affected by the global slowdown, and would expand by 3 percent at the maximum in 2013, down by one percentage point from an earlier forecast.

Government officials at the Finance Ministry say they feel more responsibilities as their ministry gets more power.

“The Finance Ministry will be able to take bolder action when it carries out microeconomic policies as the minister gets greater power to oversee the country’s economic and financial issues,” said a high-ranking official at the ministry.

“Restoration of the post will help the Finance Ministry execute budget and other policies more efficiently at a speedier rate,” Sakong Il, former economic aide to the president, told the JoongAng Ilbo.

The position was first created by President Park Chung Hee, the president-elect’s strongman father, in 1964. At the time, former deputy prime ministers were credited for their contribution to the country’s economic growth.

However, the Kim Dae-jung government sacked then-deputy prime minister Kang Kyung-shik for failing to predict the Asian financial crisis that caused the country to request a bailout from the International Monetary Fund in 1998. The IMF recommended the government ditch the position.

There were four deputy PMs for the economy during the Roh Moo-hyun administration. They were Kim Jin-pyo, Lee Hun-jai, Han Duck-soo and Kwon O-kyu.

To enable the nation to reach the $1 trillion trade volume it has seen in the past two years, the new government will entrust its trade policies to the Ministry of Knowledge Economy, which will get a new name, possibly the Ministry of Industry, Trade and Resources.

Since the Kim Dae-jung administration began in 1998, commerce and trade have been handled by the Ministry of Foreign Affairs and Trade, combining diplomacy with trade.

The new government has decided to shift the focus to hear more from local industries. The ministry taking over commerce is responsible for regulating local businesses for so-called fair growth.

Industry officials say the move is timely as many countries are practicing trade protectionism in an attempt to minimize imports and to stimulate their own local industries.

“The new government has recognized the seriousness of the issue and decided to grant more responsibility to us,” said a high level official at the Ministry of the Knowledge Economy’s trade and investment division.

“We will be able to readily respond to other countries’ protectionism as we have accumulated experience in deciding what industries to focus on to increase exports.”

Other experts point out that Korean can be better at negotiating free trade agreements because more officials will have hands-on experience in industry.

However, as the knowledge ministry will be no longer be administrating IT or science-related projects because a new Ministry of Future Planning and Science will be taking over that work, experts worry that the convergence between technology and industry may slow down.

Other experts worry that the new ministry may neglect science technology over information and communication technology.