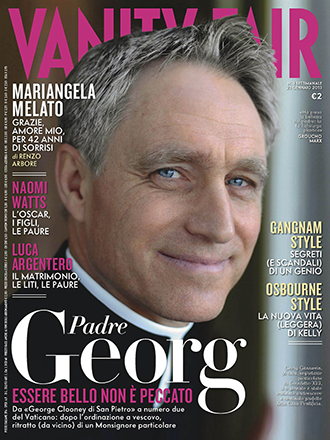 The prelate has landed the much-coveted spot of being on the cover of Vanity Fair.

The cover on the Italian edition of the magazine shows the 56-year-old archbishop smiling, his blue eyes beaming, above a headline that reads “Father Georg - It’s not a sin to be beautiful.”

The magazine calls Ganswein “The George Clooney of St. Peter’s” and says it dedicated a cover story to honour his recent promotion to the rank of archbishop and as recognition of his growing power in the Roman Catholic Church.

A spokeswoman for the magazine said Ganswein was not interviewed for the article and did not pose for the cover photo, which she said was a close-up of an existing picture.

Ganswein, who has served as Benedict’s personal secretary since the former Cardinal Joseph Ratzinger was elected Roman Catholic leader in 2005, was elevated to the higher rank of archbishop earlier this month.

A German like the pope, he was also promoted to the job of prefect of the pontifical household, a position that will significantly increase his power as the pope gets older and frailer.

As prefect, Ganswein - already one of the most recognizable and powerful figures in the papal court - will arrange all the pope’s private and public audiences and his daily schedule.

And, because he will be keeping his job as chief private secretary, he will grow to have yet even more power in deciding who has access to the 85-year-old pope.

Vanity Fair said the article about Ganswein was a “close up profile of a particular monsignor.” The magazine went on sale yesterday. Reuters