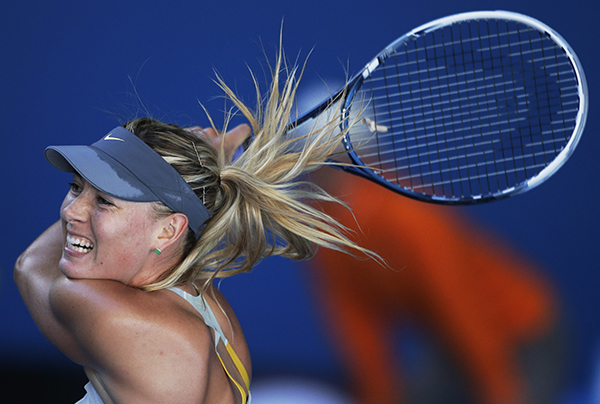 
MELBOURNE, Australia - For someone with precious little match conditioning heading into the Australian Open, Maria Sharapova didn’t look like someone concerned about any supposed imbalance yesterday.

The second-seeded Sharapova beat Japan’s Misaki Doi 6-0, 6-0 in just 47 minutes, her second consecutive match at Melbourne Park where her opponent failed to win a game. Doi won only 15 points.

Last year’s Australian Open runner-up pulled out of the Brisbane International with a right collarbone injury two weeks ago and had not played a competitive match this year until her first-round “double-bagel” win over fellow Russian Olga Puchkova on Monday.

She was the first woman to achieve that feat in consecutive matches at a Grand Slam since Wendy Turnbull at the Australian Open in 1985.

“I’ve been playing really aggressive and doing the right things,” Sharapova said. “It’s not easy to be up so much because you can have a few let-downs. You just have to try to concentrate. My job is to make it as easy as possible.”

Sharapova might find the competition tougher in the next round, where she could meet Venus Williams. The older of the Williams sisters was scheduled to play her second-round match later yesterday on Rod Laver Arena, followed by top-seeded and defending champion Novak Djokovic’s second-round match against American Ryan Harrison.

The final match of the day session yesterday on the center court was a disappointing one for the home crowd, and for Australia’s top-ranked female player. But not an entirely unexpected one. No. 9-seeded Samantha Stosur, who has spoken of her anxiety of playing in front of her home crowd, served twice for the match but double-faulted on match point to lose 6-4, 1-6, 7-5 to China’s Zheng Jie.

“At 5-2 up in the third, double break, probably is a bit of a choke, yeah,” Stosur admitted. “Obviously it’s a hard one to take when you get yourself into a winning position and you lose five games straight.”

Stosur, who had nine double-faults and 56 unforced errors, has never gone beyond the fourth round at her home Grand Slam, lost in the first round last year and also lost in her first matches at warm-up tournaments this year in Brisbane and Sydney.

“I needed to keep fighting and enjoy the match,” Zheng said. “It’s amazing I came back.”

Earlier, fourth-seeded Agnieszka Radwanska extended the best winning streak of the year to 11 matches. She eased into the third round with a 6-3, 6-3 victory over Romania’s Irina-Camelia Begu and remains unbeaten this year, including titles at warm-up tournaments this month at Auckland and Sydney. AP