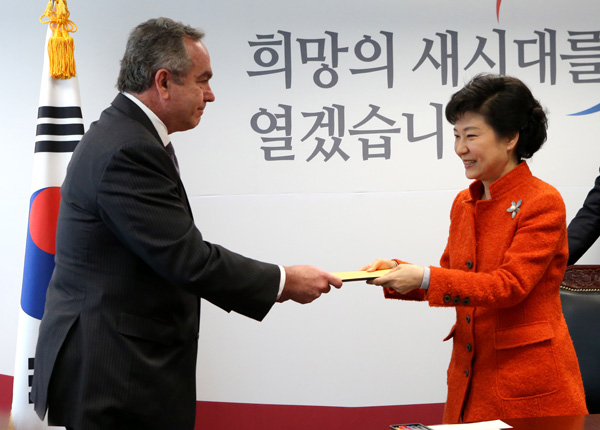 “We’re actively engaged in diplomacy and we recognize how important the outcome [of the UN response] is and we anticipate formal steps in the Security Council in the immediate future,” Campbell said, responding to the question about why there has been no specific action taken by the UN with regard to the North’s rocket launch, which was condemned as testing its long-range ballistic missile technology.

“There have been very clear, individual national responses. The U.S. and South Korea both condemned the actions, made it very clear that we thought that this was provocative and undermined peace and stability.”

Campbell’s remarks were made at the Ministry of Foreign Affairs and Trade building after his meeting with Deputy Foreign Minister Kim Kyou-hyun in the morning before paying a courtesy call to President-elect Park in the afternoon.

There, Park told Campbell and other officials including Sung Kim, U.S. Ambassador to Seoul, that she will work closely with Washington to further upgrade the bilateral alliance and to smoothly resolve pending issues based on mutual trust.

“There are many pending issues that Korea and the U.S. should discuss and I think that if the two countries hold discussions based on trust, the issues will be resolved in a smoother manner,” Park said, without elaborating on the “pending issues.”

Seoul and Washington, however, have issues on hand that include revising the bilateral energy agreement as well as Korea’s share of non-personnel stationing costs for American troops in the country.

Campbell arrived in Seoul late Tuesday with other senior officials from the White House and the Pentagon, marking the first high-profile visit by U.S. officials to Seoul since Park was voted as the country’s next president on Dec. 19.

“At every meeting, we’ve underscored our strong desire to maintain really the unprecedented level of dialogue and closeness that we’ve experienced between the U.S. and South Korea over the last couple of years,” Campbell told reporters at the foreign ministry.

“We’ve shared perceptions on the Korean Peninsula, developments in North Korea, our desire to engage positively with our friends in Beijing, to ensure relations between Japan and South Korea are on an upward trajectory and to underscore generally the strong determination of the second Obama administration, to maintain our deep commitment to the Asia-Pacific region.”

In regards to the reported speculation that Pyongyang may conduct its third nuclear test following last month’s rocket launch, Campbell said, “We are very clear in our position that provocative steps are to be discouraged.”