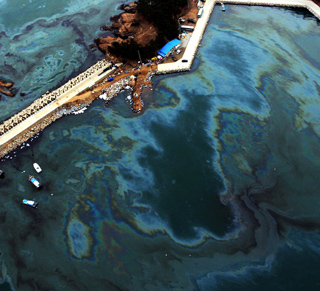 An aerial view of the beach off the coast of Taean three days after the oil spill on Dec. 7, 2007. [NEWSIS]

SEOSAN, South Chungcheong - A local court yesterday announced the compensation to be awarded to the victims of the country’s worst oil spill of five years ago.

The residents of Taean County in South Chungcheong were dismayed over what they called “unfairly low” amounts.

The Daejeon District Court’s Seosan branch ruled yesterday in a preliminary hearing that the victims of the accident should be compensated with 734.1 billion won ($693.3 million). The amount is five times higher than a preliminary assessment of 182.4 billion won by the International Oil Pollution Compensation Funds, but far lower than the compensation demanded by people affected by the disaster. 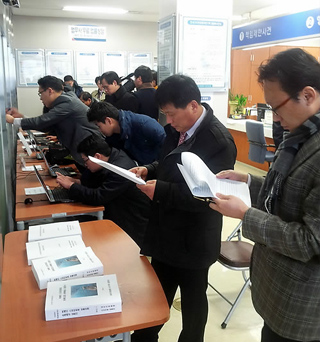 A group of Taean residents checks how much they’re to be compensated based on a ruling by the Seosan branch of Daejeon District Court yesterday. The victims of the country’s worst oil spill waited five years for the ruling but expressed dissatisfaction, calling the amount of compensation “too low.” [YONHAP]

The victims of the Taean oil spill - mostly merchants and fishermen in the area - reported 127,483 cases of damages and sought a total of nearly 4.23 trillion won, far less than what the court awarded.

The court said 413.8 billion won will be given to residents who directly suffered from the spill, while another 217.4 billion will be provided to the central and local governments for maritime restoration projects.

Another 102.9 billion won will be compensation for the cleaning operation, the court said.

The preliminary hearing is a process to check the feasibility of the compensation requested by the residents in Taean. The amount that the court has calculated will be used as the standard in future civil suits.

Yesterday’s ruling was the first-ever court calculation of the damages since the incident, said Kim Yong-cheol, the presiding judge of the case.

“When the amount is finalized, the National Assembly will approve budgets and the residents will be compensated,” he said.

Since February 2011, the Seosan branch court had been studying the damages in the region including Taean, the most damaged area, with 50 experts. It held 30 meetings to study the case. Since the amount of compensation calculated yesterday was much less than Taean residents’ demands, a series of civil suits are expected.

The residents, the Hebei Spirit and International Oil Pollution Compensation Funds have 14 days to file appeals with the Seosan branch court.

“We waited five years and this is what we get,” said Mun Seung-il, secretary general of an association of the Taean oil spill victims. “Residents who are not fishermen were awarded almost nothing. The court largely reflected the position of the International Oil Pollution Compensation Funds in the ruling and ignored the positions of the residents.”

Five years after the spill, residents in the west coast area close to South Chungcheong have not yet recovered from the damage. The local economy fell as tourists avoided the region and the amount of fish caught rapidly decreased.

“We hired five to six workers before the oil spill but now we only hire two on weekends,” a sushi restaurant owner at Mallipo Beach in Taean complained.

“I appealed to the court, to the government and even to Samsung,” said Heo Ok-sun, a 64-year-old resident who made a living harvesting sea shells from the area’s mud flats for 40 years. “Who should I trust now?”

The court said Heo is entitled to 3 million won in compensation.

Shin Mun-ung, a 44-year-old owner of a pension, said yesterday that he could not run his business for more than one year due to the effects of the oil spill. “I filed a petition to receive 13.7 million won in compensation,” he said. “But the court awarded me nothing, not even a single coin.”

Shin said he was not alone.

About 3,000 people who were not fishermen sought compensation individually without hiring lawyers or delegating the process to the association of the victims. Most of them, however, lost their claims.

Concerns were also high about the residents’ health. Taean County’s Environmental and Health Center conducted a survey last year of 10,000 residents. According to the report, the people who participated in the oil spill cleaning operation were reported to have more respiratory diseases than residents who didn’t.

“We are carefully following the effects of the oil spills on the residents’ health,” said Eom Gwi-heum, a senior official of the center.