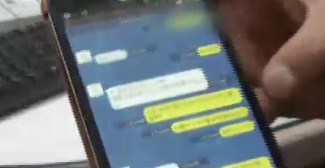 In a society where people are under pressure to get high scores on English proficiency tests to land a job, three people were caught providing a service that gave out exam answers via text messages during test taking.

The Seoul Central District Prosecutors’ Office said yesterday it has indicted a 25-year-old suspect, surnamed Shim, along with two other accomplices in their 20s without physical detention on charges of sending their “clients” pictures via Kakao Talk, with answers to exam questions.

The authorities said the trio suspects, two of whom had studied abroad in the U.S. and New Zealand, were paid 450,000 won ($424) to 2 million won to help test takers cheat on the Test of English for International Communication (Toeic) and Test of English Proficiency (Teps), raking in around 31.1 million won on 14 occasions from 21 clients from October 2011 to June of last year.

The accused put up postings under the headline “we will take the Toeic for you” on an Internet portal site to lure those in need of high English test scores.

The culprits took advantage of a loophole at a testing site that only required exam takers to submit their mobile phone batteries instead of their entire phone.

The suspects took the exam on the same day as their clients and copied their answers to a piece of paper, then asked a supervisor to use the restroom, where they popped in an extra battery and took a picture of the paper with their smartphones and sent it to their clients, who also had spare batteries.

Those who benefitted from the cheating scored as high as 955 on a Toeic test, the prosecution said. A perfect score is 990.

The authorities said it was not only university students seeking jobs who asked the trio for help cheating but also high school teachers and company workers.

“The 21 people accused of cheating will be fined up to several million won,” said a prosecutor involved in the case.