KT, Suwon get the green light to ‘Play Ball!’

KT, Suwon get the green light to ‘Play Ball!’ 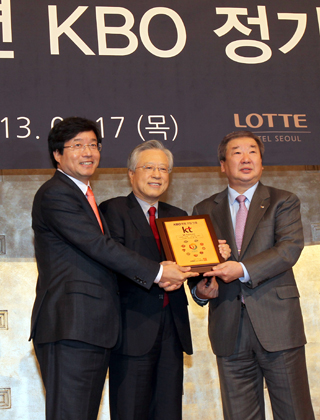 The Korea Baseball Organization unanimously approved KT and the Gyeonggi city of Suwon to host a 10th ball club in another step toward the goal of making the league the best in the region.

The decision, at a rare general meeting, upheld an independent review of business plans submitted by KT-Suwon and their rival consortium Booyoung-North Jeolla a week ago.

The plan will put the KBO only two clubs shy of Nippon Professional Baseball, the biggest league in Asia, when the team begins play in 2015.

Still, officials say much is left to be done for successful incorporation of the 10th team into a league already struggling with a diluted talent pool. The KT-Suwon will join the league just two years after the ninth team, the NC Dinos.

“I thank the KBO for a decision to pick KT and Suwon as the 10th entity to lead a new era of Korean baseball,” said Lee Suk-chae, chairman of KT, the country’s telecom giant, during the approval ceremony in Seoul. “The management of a baseball team requires a steady investment by a company. We will support our team more faithfully than the owners of any other club.”

Suwon, which served as interim home to the Hyundai Unicorns in the 2000s, launched a remodeling project of Suwon Baseball Stadium earlier this month and plan to put 29 billion won ($27.4 million) into the project.

Under the city’s plan, the two-story stadium with a capacity of 14,000 spectators will be renovated into a three-story, 25,000-seat stadium by the end of the year.

Many in baseball expect the creation of the 10th team to follow a path similar to that of the Dinos.

NC Soft, one of the country’s biggest game developers, set up the front office of the Dinos only a month after receiving approval as the ninth club’s owner last March. In August, Kim Kyung-moon, former manager of the Doosan Bears, was hired to pilot the Dinos.

The 10th ball club will be given the same preference treatment in player recruitment over the next two years as the Dinos. NC has brought in 32 rookies over the past two years including top draft picks. The Dinos also brought in eight active top-league players, one from each of the eight other teams, after the season in return for 1 billion won in compensation for each of the teams.

Many changes are anticipated for the league with the advent of the 10-team era in 2015, including the post-season format.

Currently, the top four teams vie for the title through three playoff series. A playoff in the 10-team league could have more participants. For example, the 10-team Korean Basketball League pits six top teams against one another in the playoffs.

That is a significant marketing boon for the league, which surpassed the seven million mark in attendance for the first time last year, for an average of 13,451 per game. If that number holds up, the 720 games in 2015 would attract 9.68 million.

There are concerns, however, that the quality of the league could deteriorate. Currently, there are only 50 to 60 high school baseball teams across the country supplying players to KBO teams. The Nexen Heroes, the league’s eighth team which joined in 2008, has never made to the playoffs.