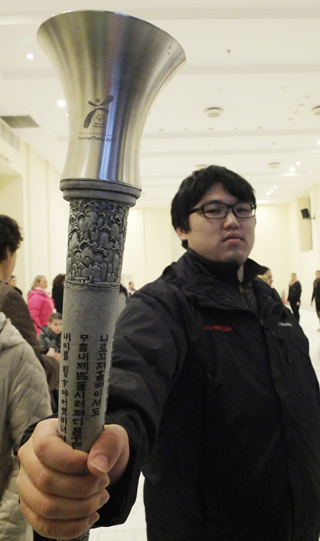 The Pyeongchang Special Olympics World Winter Games marked a torch-lighting in Greece last night, Korea Standard Time, as organizers beef up preparations for the start of the event less than two weeks away.

During the lighting ceremony, 30 Greek priests, including 15 with mental disorders, delivered the torch to Greek officials and athletes, and then to Na Kyung-won, chairman of the organizing committee, according to the committee.

Na then tossed the torch to Kim Min-yeong, a 23-year-old mentally challenged athlete from Korea, for the ensuing relay.

“This [torch-lighting] event marks the beginning of the official schedule of the Pyeongchang Special Olympics World Winter Games,” said Na. “The torch, which is the flame of hope, will be a symbol of understanding and harmony.”

The Pyeongchang Special Olympics World Winter Games, to be held starting Jan. 29 in the Korean winter resort city in Gangwon, is the world’s biggest winter sports event for people with disabilities. About 3,300 people, including 2,500 athletes from more than 120 countries, are scheduled to participate in the eight-day event.

The torch relay is an integral part of the Games. Called the “Law Enforcement Torch Run,” the relay features police officers accompanying the torch bearers in a gesture symbolizing the world’s embrace of the mentally challenged.

The torch will be flown to Korea, arriving tomorrow afternoon, and the domestic torch relay will start Wednesday from Gwanghwamun, central Seoul, to Pyeongchang. A total of 133 people will participate in the relay, the committee said.

It is the first time for Korea to host the Special Olympics World Games, although the smaller and more frequent Special Olympics have been held in the country several times. Pyeongchang is the third Asian host of the World Games after the 2005 World Winter Games in Nagano, Japan and the 2007 World Summer Games in Shanghai.