Even at 80, Yook Wan-soon dances without a hitch

Even at 80, Yook Wan-soon dances without a hitch 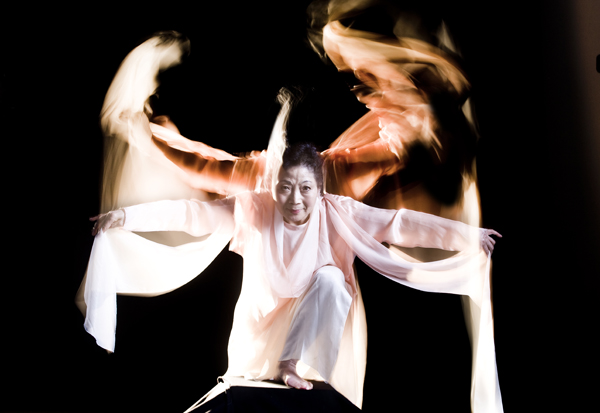 Yook Wan-soon, 80, is considered the pioneer of modern dance in Korea. At a recent photo shoot, she went on turning, coiling and jumping for 40 minutes, showing the stamina of a young performer. [JoongAng Ilbo]

An armada of artists gathered in Seoul on Tuesday - 80 choreographers and 400 dancers - all to honor one person: Yook Wan-soon.

At 80, Yook, often called the pioneer of modern Korean dance, has developed quite a following during her 50 years in the business. Though it is not unusual to celebrate the 50th anniversary of a show, doing so for a person is quite unusual, and the sheer scale of Yook’s accomplishments is unmatched in Korea.

Hence the fanfare at the “50th Anniversary of Yook Wansoon Modern Dance Festival,” held at the Arko Art Theater in central Seoul. After the opening ceremony on Tuesday, 80 choreographers began showcasing their work yesterday, and shows will continue for eight days. Yook’s disciples and disciples of disciples are among the participants, and this is a chance to see the broad impact Yook has had on the modern dance scene here.

“You must be a strict teacher to get so many people to come celebrate you,” a reporter joked.

“No, this is just a celebration of the 50th anniversary of modern Korean dance,” Yook responded. “They just insisted that my name be on it.”

But it is no exaggeration to say that Korean modern dance came into being on the day of Yook’s debut. That was in 1963, the year she returned from studying in the United States, when she performed at Myeongdong Theater in central Seoul.

“At that time, people knew only ballet and traditional dance,” Yook explained. “There was not even the concept of contemporary dance. As I rolled over and stood on my head on stage, they called me ‘crazy’ or ‘barbarian.’?”

“The secret that enables me to dance at my age is contraction and release,” Yook said of the techniques she had learned. “There is no forced movement. Following nature is the essence of dance.”

Yook’s return to Korea also marked the beginning of dance education here as it is known today. After she began teaching at Ewha Womans University, other universities followed suit in creating dance departments.

“At university, I graduated from the athletic department because there was no dance department back then,” she said.

“I learned dance little by little, just threw balls and ran during my university years. People laughed at me, saying I was empty-headed. That was when I became determined to formulate dance theory one day and become a great dancer.”

She pursued he goal with great determination.

One of Yook’s best-known works is “Superstar Jesus Christ,” first performed in 1976.

“The night before we started rehearsal, I called the members just after the end of curfew and ordered them never to be late. All 28 cast members came to rehearsal room on time - at 5 a.m. - and we practiced that way the whole month. That performance was made of hard work. I asked my husband to treat me as if I had run away.”

The work has been performed over 300 times in the past 40 years.

Though the anniversary celebration has expectedly focused on the positive aspects of Yook’s history, one incident nearly derailed the dance master’s career back in 1991.

The scandal, concerning admission irregularities and a college entrance exam, led to her expulsion from a university where she was teaching in 1991.

“I was arrogant and vain then. I just feel so ashamed of myself. But I learned something through the incident,” Yook said. “Above all, it was a chance to reflect on the reason I started dancing. Perhaps I have danced until now to wipe off the disgrace.”

And people hardly seem to notice that incident anymore, instead focusing on performances by her and her disciples, who now hold many high-level positions in the world of Korean dance.

Even with such a legacy bound to last far into the future, Yook continues to live and breath dance. She stretches at least two hours per day, even now well into her silver years. She performed at the opening of the festival in her honor on Tuesday and has shown no signs of fatigue.

“I am dreaming about a new stage even now,” she said. “I think this is what being an artist is all about.”