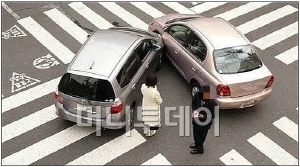 The Financial Supervisory Service is encouraging drivers to install black boxes in their vehicles as doing so can shave from 3 to 5 percent off their insurance premiums, the financial watchdog said yesterday.

The data recorders can prove crucial in legal disputes as they record the final moments leading up to a collision, often indicating who is at fault.

The government introduced the discount policy in April 2009 but the FSS is promoting it now due to low levels of awareness among local drivers.

At present just 9.8 percent, or 1.32 million of 13.45 million drivers with insurance policies, enjoy such discounts, it said.

The FSS said the widespread use of black boxes kills two birds with one stone as they mean lower rates and fewer accidents.

Corporate taxis began installing the recording devices in 2008 with the financial support of regional governments and the rate of accidents dropped 17.7 percent from 2007 to 2011, from 24,692 to 20,331 cases, according to statistics provided by the Korea Transport Institute.

“Apart from saving on their insurance fees and lowering their chance of being involved in an accident, drivers can use the footage as evidence when determining who was at fault in instances where there were no witnesses [or CCTV] at the crash site,” said Kang Han-gu, who works at the FSS’s insurance supervision bureau.

This also helps deter scammers who seek hefty payouts after deliberately jumping in front of cars or pretending they have been hit by vehicles, he added.

Market observers believe more drivers are likely to benefit from the government’s discount policy in the future as the political circle is working to make them more commonly used.

The National Assembly is waiting to vote on a bill that would make it mandatory for all automakers to install black boxes after the Assembly’s committee on land and maritime affairs submitted it in November.