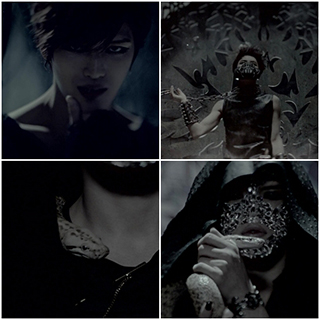 The music video for the title track was also unveiled, and within hours, hundreds of thousands watched the clip in which Kim shows off a gothic rocker look.

The video has a surreal, fantasy-like feel, with Kim taking on various roles, including a man in chains, a vampire, a demon-like angel and others.

A spokesperson from CJeS said that with the debut song, Kim tried to portray the beauty of a “dark angel.”

“You can see Kim in torment and confusion,” the spokesperson said. “But he overcomes it all to hold onto the things that are dear to him.”

Seven sets were produced for the video.

With the new album, Kim is hoping to make his mark as a rocker rather than an idol singer.