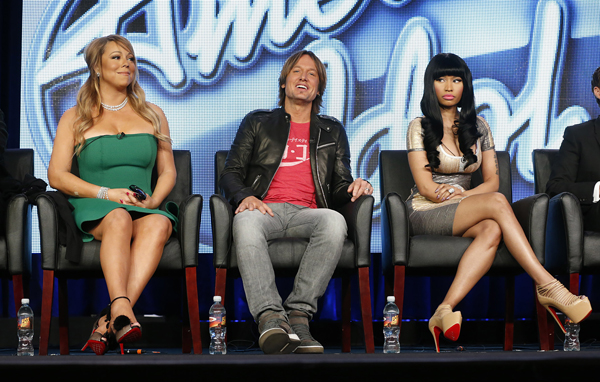 LOS ANGELES - “American Idol” returns on Wednesday with the tantalizing promise of fame, fortune and feuds - and that’s just among the celebrity panel hired to find the next pop music sensation. Singer Mariah Carey, rapper Nicki Minaj and country artist Keith Urban make their debut as judges when the TV talent contest begins its 12th season on Fox.

“What everyone is going to be looking at, sadly, is how Mariah and Nicki Minaj get along, instead of focusing on the contestants,” she said.

Carey, with more than 200 million album sales, the outspoken Minaj, one of the most exciting voices in rap, and Urban are expected to revive interest in the contest. Last year, average audiences dipped below 20 million, and “Idol” lost its eight-year crown as the most-watched show on U.S. television to NBC’s “Sunday Night Football.”

The three newcomers replace departing judges Jennifer Lopez and Aerosmith frontman Steven Tyler who quit last year after two seasons. The new panel, rounded out by old hand record producer Randy Jackson, didn’t come cheap. Carey is reported to be earning approximately $18 million for the season, Minaj about $12 million and Urban $8 million. But industry watchers say “Idol” needs more than big names to bring in audiences at a time of cutthroat competition from talent contests like “The Voice,” “The X Factor” and “America’s Got Talent.”

“While shaking up the show can initially provide curiosity tune in, at the end of the day, the panel needs to click with each other and with fans,” Entertainment Weekly’s James Hibberd said.