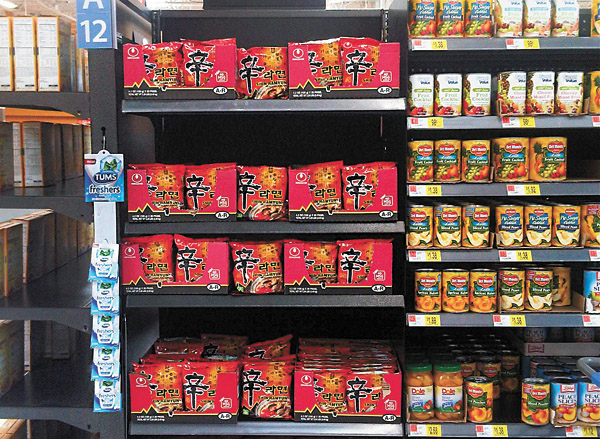 Nongshim’s Shin Ramyun products are displayed at Wal-Mart’s “Asian Food Section” yesterday at one of its stores in Los Angeles. Provided by the company

Nongshim America has signed a contract with Wal-Mart, the world’s largest retailer, to directly supply its ramen noodle products to 3,600 of its stores across the U.S., the U.S. branch of the Korean food maker said yesterday.

It is the first time for a Korean food company to ink such a deal with Wal-Mart. Currently, only major global players like Coca-Cola, Nestle and Pepsi directly sell to the U.S. retail giant.

Nongshim, the country’s largest processed food manufacturer, said yesterday that its U.S. branch has been directly distributing its products to Wal-Mart since early this month.

Until last year, Nongshim America supplied its products to Wal-Mart through local dealers. 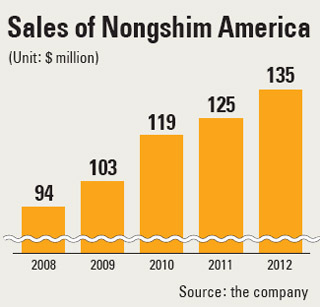 A direct sales contract means Nongshim can adopt more strategic marketing strategies in the U.S. by analyzing sales data from Wal-Mart, it said.

It will also be able to hold various promotional events there, it added.

Nongshim first exported its ramen products to stores in Los Angles in 1971. It aggressively made inroads in the U.S. after establishing Nongshim America in 1994 and began operating a factory in L.A. in 2005.

Since 1994 it has been expanding its distribution network in the U.S. by also penetrating small supermarkets and regional retail markets along with major retail chains like Costco.

Among them, Nongshim’s Shin Ramyun and Yukgaejang instant cup noodle have been the best-selling items for several years.

“We proposed the direct sales contract with Nongshim as we have confirmed the popularity of Shin Ramyun and Yukgaejang instant cup noodles over many years. They are not just popular among Korean-Americans, but among all Americans,” a Wal-Mart spokesman said.