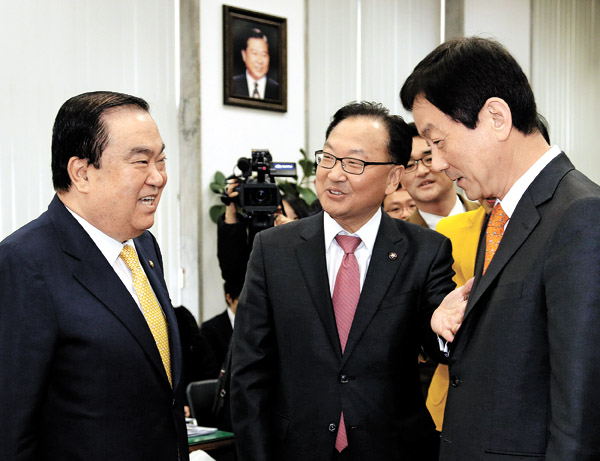 Folding the trade division of the Ministry of Foreign Affairs and Trade into the proposed Ministry of Industry, Trade and Resources (tentative English name of the ministry to replace the current Ministry of Knowledge Economy) is not desirable and there will be discussions within the party to put things back the way they were, said Ahn Hong-joon, chairman of the National Assembly’s Foreign Affairs, Trade and Unification committee, yesterday.

Ahn said yesterday that “the trade division being part of the Knowledge Economy [or to-be Industry] Ministry is an issue raised by the transition team but as committee chairman I don’t think this is desirable.”

“[Handling] free trade agreement is closely related to diplomacy and there have been no big problems raised over the past years. I don’t know what really happened.”

Ahn’s remarks were made yesterday in a speech at the Trilateral Business Networking Reception hosted by the Seoul-based Trilateral Cooperation Secretariat in collaboration with the Korea International Trade Association, Seoul Japan Club and the Chinese Chamber of Commerce in Korea, at the Plaza Hotel in central Seoul.

The reception was held to commemorate the official announcement of the launch of the trilateral FTA negotiations and also to facilitate networking among business groups of the three countries.

Ahn told reporters after his speech that “the Ministry of Foreign Affairs and Trade has been doing well [with its job together] and [pending] trade issues like the Korea-China FTA involving agriculture are directly related to diplomacy.”

“It seemed to me that there wasn’t sufficient discussion [prior to the transition team making the announcement],” he said, adding that he will start persuading other lawmakers, including the head of the Saenuri Party, and consult with related experts.

“If a consensus is created [not to follow the transition team’s decision to break down the foreign affairs and trade ministry], the matter will eventually be discussed at the National Assembly.”

The new structure is subject to legislative approval later this month.

The plan included adding the trade division to the knowledge economy ministry, which will become the Ministry of Industry, Trade and Resources.

The trade affairs division was added to the Foreign Ministry during the Kim Dae-jung administration.

Diplomats involved in trade affairs within the foreign affairs and trade ministry responded with panic, perplexed after hearing the news.

Things have also been made more difficult for Trade Minister Bark Tae-ho, who was nominated last month as a candidate for the top post of the World Trade Organization.

If the restructuring is confirmed, it will be difficult for Bark to continue his term as trade minister, which will make it difficult for him to compete with other nominees from countries including Brazil, Mexico and Indonesia.