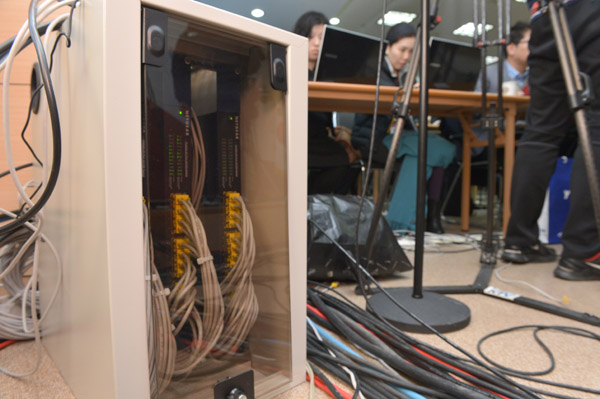 The unguarded Internet connections in the press room of the presidential transition committee in Samcheong-dong, central Seoul. [Joint Press Corp]

The transition team of President-elect Park Geun-hye told reporters that North Korea could be hacking into computers used in its press room, a day after the National Police Agency said that Pyongyang was behind the massive cyberattack against the JoongAng Ilbo last June.

An hour later, just after reporters had filed stories about the possible hacking, the team withdrew the warning, leaving reporters scratching their heads.

At a closed door meeting with reporters yesterday morning, Lee Won-gi, an administrative spokesman for the presidential transition team, advised reporters to be careful with the laptops they used in the team’s press room because there was a “trace” found by government agents that Pyongyang hackers were trying to get into them.

“After the intelligence authorities conducted an overall online security check, they have detected a trace that North Korea attempted to hack into the press room,” Lee said.

Government organizations use their own public intranet networks under the direct protection of the National Intelligence Service’s online security system.

But the press room in a government building does not use the protected government intranet.

Asked if other rooms in the team’s office were also attacked, Lee said evidence of an attack was found “in the press room only.”

The team advised reporters to change passwords on their computers and run antivirus programs.

Reporters were spooked because the day before the National Police Agency announced that North Korea was behind the massive cyberattack on the JoongAng Ilbo last June, which devastated databases and its editing system. The Korea Joongang Daily, its English edition, was also affected.

However, an hour after the warning, Lee returned to the press room and took back his warning.

“I just meant there is a possibility of a potential hacking hazard, so you should be careful,” he said.

“It is my fault,” Lee said. “I was ordered to tell reporters to take precautions.”

When reporters demanded more explanations, Yoon Chang-jung, a spokesman of Park, convened another press meeting in the afternoon.

“Technically, the press room of the transition team’s office is vulnerable to a cyberattack,” Yoon said. “That’s because, as you know, the press room is using a commercial Internet network, while all government officials here are mostly using the intranet.

“Based on this point, the intelligence authorities have asked us to ensure online security in the press room and tell you to use an antivirus software and change passwords of your computers frequently,” he said. “In the process of delivering this message, it is true that there was some misunderstanding.”

The opposition Democratic United Party lashed out at the team.

“It’s such a shame,” said Kim Jeong-hyeon, a deputy spokesman for the DUP. “How, in a country with a strong IT industry, can a presidential transition team say they suspect hacking by North Korea without sufficient investigation?”