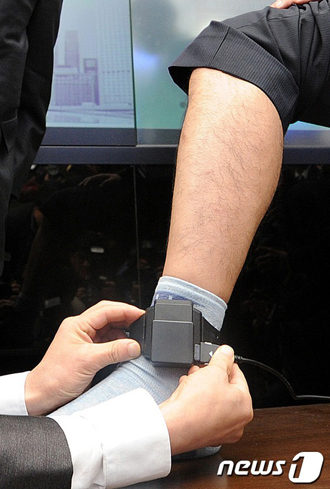 Police are pushing to put in place an alert system as part of an electronic tracking device that would send a locating alarm when a sex offender nears a school zone.

The National Police Agency said yesterday they planned to launch an alert system that can send sex offenders’ whereabouts to local police and schools when previously-convicted sex offenders currently wearing an electronic tracking device come within 200 meters (656 feet) of a school zone as a measure to prevent sex crimes targeting minors.

As the Constitutional Court ruled on Dec. 27 last year that it is constitutional to put electronic tracking devices on sex offenders convicted before the relevant law was enacted, about 2,500 additional sex offenders are expected to be under the surveillance system.

“It is a plan that could prevent those sex offenders from targeting teenagers preemptively,” a spokesman for the National Police Agency told the JoongAng Ilbo.

The police said there has been a yearly increase in convictions of sex offenders wearing anklets.

It said that only one sex offender was caught in 2008 but 20 sex offenders were charged in 2011 and 14 were arrested from January to August last year.

Sex offenders who had committed two or more acts of sexual assault of someone younger than 16, and those who committed a sex crime after they were required to wear an electronic tracking device in the past, will be under the new surveillance system.

Yesterday, Gwangju District Court sentenced a 21-year-old man surnamed Kang who was charged with sexually assaulting a 12-year-old boy twice in 2009 and 2012 to be chemically castrated by hormonal treatment. Kang previously received suspended prison terms in 2008 and 2010 for sexually molesting several boys and girls.

“We judge that Kang isn’t able to control his sexual desire,” Senior judge Lee Sang-hyeon from the Gwangju District Court said in the ruling.

The court also sentenced him to 34 months in prison and to open his personal profiles including a photo of his face and real name on the government’s Web registry (www.sexoffender.go.kr) for five years as well as to wear an electronic tracking device for six years after his release from prison.

On Jan. 3, a Seoul court sentenced another man, who was charged with raping five minors, to receive chemical castration.