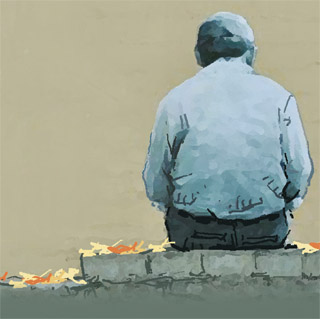 A 70-year-old woman surnamed Kim visited a hall for seniors in Cheonan, South Chungcheong, upon hearing there would be free performances in July of last year.

When Kim showed up, around 100 people her age were already there enjoying the free concert.

One of the performers introduced himself as a leader of a troupe on the road and began handing out household goods such as toilet paper and packs of sugar.

One performer even offered to give free shoulder massages. The free concert, which took place for two hours each time twice a day, was held over the course of five days. 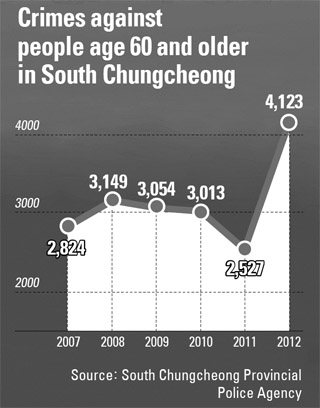 On the last day, the troupe leader did one more thing besides performing: selling health supplements.

“Grandmothers, we are here to offer you trusted health products that will give you extra strength in your knee joints for 160,000 won [$151] for each pack, half of the original price.”

Kim did not hesitate to buy the product, thinking the product must be good as it is advertised by “kind” people. Kim was one of 385 seniors there who purchased the product, which actually costs less than 20,000 won a pack.

The police raided the center on the fifth day, arresting all 10 troupe members for fraud that bilked the 385 seniors for 45 million won.

Crimes specifically targeting seniors are on rise, especially in areas with a high density of older people.

Five areas in South Chungcheong and South Jeolla have become super-aged towns, which refers to a place that has more than 20 percent of its population aged 65 and older, and are displaying more acute problems stemming from senior-targeting crimes.

From January to October of last year, 18,750 seniors in South Chungcheong were duped or robbed for a total of 10.1 billion won. Violent crimes against the elderly nationwide also increased to 1,110 last year compared to 829 in 2007.

“In rural areas where the proportion of aged people is high, it’s more likely the elderly are victims of fraud while violent crimes against the elderly occur in major cities,” said the police.

The fraud 70-year-old Kim experienced is one of the most commonly-used tricks.

Fraudulent merchants build up relations with the elderly before asking them to buy their products, which are mostly health supplements.

Voice phishing is also a main form of crime as they are more vulnerable to being tricked by scammers.

With an increased numbers of seniors living alone, break-in theft cases have also become more frequent in rural areas, taking advantage of the tendency seniors have to leave their houses unlocked.

“Growing cases have been reported in recent years in which schemers exploit a growing sense of loneliness among seniors to sell their fake products at exorbitant prices.”

In response to the growing numbers of crimes against the elderly, the National Police Agency announced Tuesday they would consider setting up a new division exclusively for elderly safety.