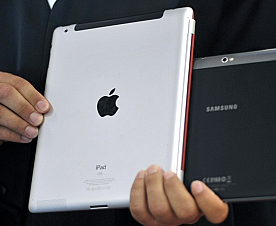 Apple says a U.S. appeals court hobbled its efforts to protect patented designs and features against copying by Samsung Electronics, its biggest competitor for smartphones and tablet computers.

The iPhone maker has asked the full complement of judges at the U.S. Court of Appeals for the Federal Circuit to review, at the same time, two appeals seeking to block sales of Samsung products that Apple says violate its patents. Panels of three judges typically hear appeals first, with the entire court sometimes stepping in when broad legal issues must be settled.

“The two cases would present an ideal vehicle for eliminating the uncertainty regarding when a patentee can prevent a competitor from trespassing on its patented innovations,” Apple told the court in a filing Wednesday.

Apple, which claims that Samsung “slavishly” copied the iPhone and iPad tablet computer, claims a Federal Circuit ruling is hindering its efforts to get court orders that would force Samsung to change its products or remove certain models from the market. Samsung denies copying Apple’s devices.

The companies, which together make about half of the smartphones sold worldwide, are fighting over patents as part of a global battle for market share.

A three-judge Federal Circuit panel said in October that Samsung could continue selling its newest Galaxy Nexus smartphone while battling patent-infringement claims by Apple. To obtain an order, called an injunction, that would block sales, Apple must show that the patented search feature under dispute drives consumer demand for the product, the panel said.

Based on that standard, a trial judge in December rejected Apple’s effort to halt sales of other Samsung products during the continuing legal fight over a $1 billion infringement verdict against Samsung.

Apple had already asked the full Federal Circuit to reconsider the three-judge panel’s October ruling. Thursday, Apple urged the full court, which specializes in patent law, to review the trial judge’s December decision at the same time without first having the case heard by a panel of three judges.

By refusing to halt sales of Samsung products that were at the center of the $1 billion verdict, U.S. District Judge Lucy Koh “made it essentially impossible for a patentee to halt a direct competitor’s deliberate and successful copying of the patentee’s innovative designs and features for use in competing products,” Apple wrote.

“Although individual features in complex products may be generally important, they will almost never drive consumer demand by themselves, at least not provably,” Apple said. “Consumers buy complex technological products for a whole host of reasons, often with no one reason determining the customer’s decision.”

Separately, Apple CEO Tim Cook was ordered to give a deposition in a lawsuit claiming the iPhone maker and other technology companies violated antitrust laws by entering into agreements to not recruit each other’s employees.

U.S. District Judge Lucy Koh in San Jose, California, issued the order at a hearing yesterday over the objections of George Riley, a lawyer representing Apple. The other defendants in the case include Google, Intel, Adobe Systems, Walt Disney’s Pixar animation unit, Intuit and Lucasfilm.

Koh told lawyers yesterday that Apple founder Steve Jobs was copied on e-mails at issue in the case, and that she found it “hard to believe” that Cook, as Apple’s chief operating officer at the time in question, wouldn’t have been consulted about such agreements.

The judge said she was disappointed that senior executives at the companies involved hadn’t been deposed before yesterday’s hearing over whether she should certify the case as a group lawsuit. The class would include different categories of employees whose incomes, their lawyers argue, were artificially reduced because of the collusion. Koh didn’t rule on class certification. Bloomberg