Korea readies for the Special Olympics

Korea readies for the Special Olympics 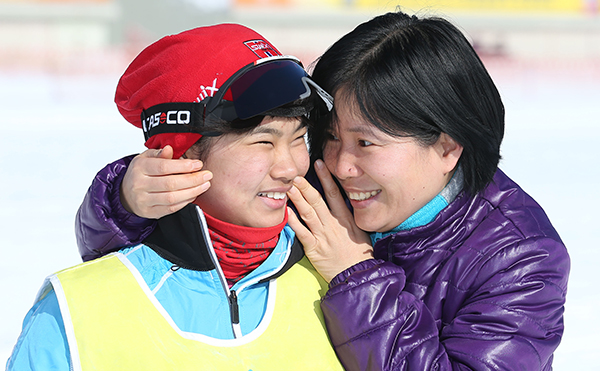 Choi Ah-ram, who will compete in cross-country skiing in the 2013 Pyeongchang Special Olympics World Winter Games, smiles with her stepmother, Kim Jeong-ok, after training at the Alpensia Resort in Gangwon last week. By Kim Do-hoon


On Jan. 11 at Pyeongchang Alpensia Resort in Gangwon, about 40 skiers wearing yellow vests were busily coming and going among vacationers.

They will be participating in the 2013 Pyeongchang Special Olympics World Winter Games that will start on Jan. 29.

The event is separate from the Paralympics, where the physically disabled, including people who are visually handicapped and hearing-impaired, participate.?

“Lower your upper body this time, then we will get a better time,” Park told Choi via radio. Choi is the best cross-country skier among the intellectually disabled athletes, including adults. She started skiing in late 2010, and won the title in the 8th Korean National Winter Para Games in January 2011.

“I’m not tired at all,” Choi said with a smile after finishing a 5-kilometer (3.1-mile) practice run. “I want to win a title in Pyeongchang.”

Choi didn’t have such a bright personality until she began cross-country skiing. Because her mother was sick, she had to take care of her 15-year-old sister who suffers from cerebral palsy and two younger siblings on her own.

When she was in elementary school, she was ostracized by classmates who made fun of her low command of language. She hid in the restroom during class hours to avoid those classmates.

She became withdrawn when her mother died in 2007, but opened up again after she met her stepmother, Kim Jeong-ok, 42.

When Kim met her stepdaughter, Choi wouldn’t speak, but Kim never gave up. She patiently asked her about her school life every day and tried to play with her.

Now she’ll even make up an excuse like “Mom, my ankle hurts,” when she wants to skip practice.?

Coach Park also helped Choi find her voice. When she was transferred to Taebaek Mirae School, a school for intellectually disabled students in 2009, Park recommended she take up cross-country skiing.

Park said she trained for two hours a day, even during her summer vacation.

In the Pre-Olympics held in February last year, she won three titles in cross-country skiing.?

The training session for snowshoeing was held at the main stadium in the Alpensia Resort. Among 24 athletes, a man who is a good head taller than the others was running though a snowfield.

The man, Jang Seong-cheol, 35, was the oldest competitor.?

Jang lost his father when he was 6 years old and his mother had to go work at a mine.

When his brother and sister had to leave their younger brother, Seong-cheol, alone to go to school, they had to lock the door because he suffered from epilepsy.

His life started getting better after he learned football and samul nori, or traditional percussion, at a community center for handicapped people.

“He began snowshoeing early last year, and he hasn’t had a seizure since July,” said Jang’s mother, Lee Byung-sook.