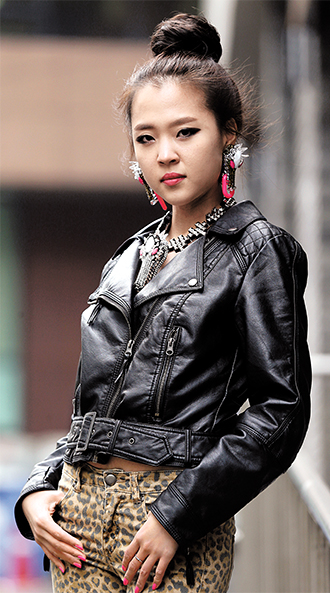 Lee Il-jung, a 28-year-old designer, has had some notable achievements since she set up her own handmade jewelry brand, Feverish, last year.

After launching the brand in February, Lee has not only been spotlighted by renowned worldwide media like the Guardian and Glamour, but she has opened high-end stores in London, Los Angeles, Bangkok, Dubai, Hong Kong and Riyadh, Saudi Arabia.

After introducing the brand in Korea, Lee got on an airplane in June and headed to cities well-known for their fashion industries: Milan, London and Paris.

She spent three months in these cities and after that went to Los Angeles and New York.

The young jewelry designer strolled down the streets of cities crowded with residents and tourists, wearing Feverish jewelry. Her plan was to walk the streets.

She considered herself a model for her own brand, in which her handmade jewelry was designed in the shapes of animals like crocodiles and bats.

As an Asian, Lee was different. But there was also another reason: The jewelry she was wearing.

People approached her and asked questions like, “Where can I buy these earrings?” and, “Can you sell them to me?”

A passerby also approached her and said, “I will introduce you to a department store buyer.”

The reason why Lee headed overseas was to target the global market with her personal brand in her personal way.

She thought Korean consumers might find her jewelry too extreme, but foreign consumers would find it unique.

After earning more confidence in her brand because of the people she met in the different cities she visited, Lee went directly to a renowned store that sells luxury brands and introduced herself and her jewelry.

She characterized what she did as knocking her head against a stone wall, admitting that it was reckless. But the outcome was successful. Buyers who saw the products placed orders after signing contracts with Feverish.

Lee is now gaining attention in Korea. She is currently the talk of the town among entertainment stars who enjoy wearing her jewelry. Three members of Girls’ Generation ? Yoona, Tiffany and Yuri ? wore her accessories when being photographed for their fourth album.

Lee spent her childhood abroad in Germany and England when her father was an working for a Korean firm.

She had her dark days - Lee’s friends called her “the ugly Asian child.”

It wasn’t until Lee was in university that she began to get recognized. She graduated from London-based Central Saint Martin College of Art and Design, studying jewelry design.

This year, Lee plans to open 20 stores in 15 countries.

The designer is also in talks with Swarovski for a joint project.