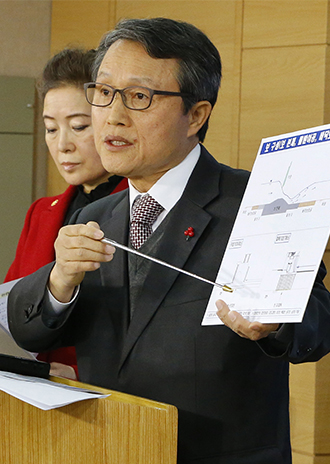 The government yesterday faced off against state auditors who said the construction of the massive four-rivers restoration project was “shoddy.”

The government said the work on the project was perfectly fine.

The Board of Audit and Inspection released a report Thursday on the project and its effect on the environment, which it was designed to help.

“Due to shoddy planning, 11 of the 16 reservoirs lack durability, and an irrational management of water quality raises concerns about a worsening of water [quality],” the report said in a summary. “The ineffective planning for dredging will require excessive costs for further maintenance.”

The auditors claimed reservoirs will not be able to withstand a massive influx of water if the floodgates are opened, and the gates could be damaged by water pressure.

They said the facilities to prevent the erosion of river beds were already damaged.

The water quality in the reservoirs was also a serious concern, the auditors said. A slower flow of water in the reservoirs could lead to eutrophication, which promotes excessive algae growth. It also said the amount of oxygen in reservoir waters dropped in all 16 reservoirs since 2009. 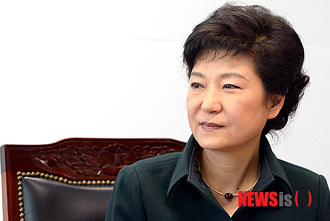 In August 2012, massive algal blooms formed at Yangsuri in the northern Bukhan River, which environmentalists blamed on the project.

The Blue House had no response to the Board of Audit announcement yesterday. But the ruling Saenuri Party floor leader Lee Hahn-koo called for “a certain solution” if its conclusions prove true.

President-elect Park Geun-hye has not mentioned the matter as of yesterday. She said during her presidential campaign last year that she would “review the project if any flaws are found.”

They said the reservoirs are strong enough to bear an influx of waters and the algae was not related to the project.

“The appearance of algae occurred before the construction,” Yoo Young-sook, Minister of Environment, said. “We need to take a long-term perspective in evaluating water because it’s been only a year since the construction was completed. Water quality can be affected by many factors, such as weather conditions.”

“The reservoirs of the four-rivers restoration project have no problems in terms of function or safety,” Kwon Do-yup, the Land Minister said. “We have carried out more thorough management and follow-ups on the project than any other projects so far .?.?. the reservoirs also helped prevent damage from four typhoons last year.”

Kwon admitted there were “imperfections” in the construction but said there were no international standards in river bed protection yet.