Will the beefed-up NIS continue with a new president?

Will the beefed-up NIS continue with a new president? 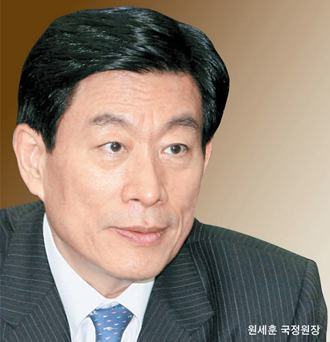 While President-elect Park Geun-hye’s administration will kick off on Feb. 25, much attention is being paid to how it will coordinate the National Intelligence Service (NIS).

The status and role of the NIS were greatly different over the past five years of the incumbent Lee Myung-bak administration, compared to the 10 years before led by Kim Dae-jung and Roh Moo-hyun.


“In the course of past [liberal] Kim Dae-jung and Roh Moo-hyun administrations, intelligence sources regarding North Korea were scaled down and there was difficulty in collecting key information [about the North],” said a high-level conservative official.

“[Under the administration led by President Lee], however, the quality and quantity of intelligence secured by director Won Sei-hoon greatly improved.”

Currently, the NIS is headed by Won, President Lee’s right-hand man, who began his post in February, 2009.

The official added that “the incoming administration should maintain such an approach for the sake of strengthening the capability of national security.”

According to the NIS, the total number of high-class intelligence sources collected by the chief intelligence agency about high-ranking North Korean officials, including leader Kim Jong-un, more than doubled compared to the Roh administration. 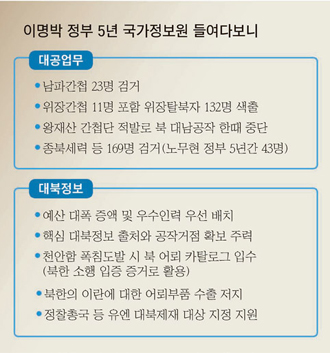 Under the Lee administration, the NIS has also arrested 23 North Korean spies sent to the South and charged 169 South Koreans with praising or supporting the communist regime.

During the five years of the Roh administration, 43 were caught praising the North.

The NIS also reorganized its North Korean affairs department into divisions including strategic planning, early warning management and analysis of the current situation in the North.

It also created a new team that exclusively analyzes Pyongyang’s strategies taken against Seoul and also the internal state of affairs.

“The budget for handling North Korean affairs [within the NIS] has been sharply increased compared to the previous administrations and there are more veteran agents with expertise,” said another high-level official.

The NIS is also currently operating a double surveillance system on North Korean key officials, tracking their movements, and also of unusual activities by the regime’s military.

According to the NIS, it has also actively shared intelligence with overseas intelligence agencies, including the U.S. Central Intelligence Agency.

In March 2010, when the North attacked South Korean warship Cheonan, the NIS was able to obtain a North Korean torpedo catalogue used for exports, which provided a critical clue in revealing that North Korea was behind the provocative act.

“There is a need to strengthen the NIS’ overall [intelligence] capability so that it is able to collect and analyze all intelligence, including those inside the country, outside the country and of North Korea,” said an NIS official.