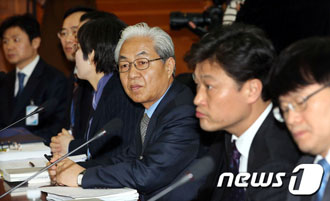 Enabling free education for all high school students and requiring less testing of middle school students while providing a more interactive curriculum were all emphasized by the Ministry of Education, Science and Technology Tuesday as part of efforts to fulfill President-elect Park Geun-hye’s campaign pledges.

The Education Ministry also proposed to push back the National English Ability Test (NEAT), originally slated to replace the current English-language section of the College Scholastic Ability Test (CSAT) in 2015, by at least three years to 2018.

The state-administered NEAT is intended to lessen dependence on U.S.-based English proficiency tests such as Toefl and Toeic, which factor into college admission and employment.

Officials state NEAT, designed by the Korea Institute for Curriculum and Evaluation, will be cheaper than such tests and will be an effort to improve the nation’s English-speaking proficiency.

The CSAT has been criticized for not testing students’ ability to speak and write English, instead focusing on memorizing vocabulary and grammar rules.

Officials stated the reason for the postponement as being that “if NEAT is administered in an environment in which schools are not thoroughly prepared, private education will prevail and lead to gaps in regional and income levels for students.”

The Education Ministry has over the past several years been pushing to cut down on students’ reliance on private institutions to boost test scores.

Furthermore, the public is not yet ready to accept NEAT as a replacement test, with only half of teachers approving of it in a recent survey, officials said.

The presidential transition team received a policy briefing from the education officials, among reports from seven other ministries and government agencies, which included a plan to provide free education, which covers tuition, textbook fees and other school-related expenses, for all high school students by 2017.

This comes in the middle of the reshuffling of ministries by the transition team, which includes splitting education and science into separate ministries.

Currently, students from low-income households and vocational high schools, a third of all high school students, receive free education, and the ministry plans to expand this program by 25 percent each year starting from next year.

The plan is in-line with Park’s vision to ensure all students from kindergarten to high school receive free childcare and education before the end of her five-year term. President Lee Myung-bak’s administration pushed for free child care for all children under five.

“The closest relationship we have with the people is education,” Kim Yong-joon, chief of Park’s transition team, said at the briefing, requesting the Education Ministry to “put effort into letting people feel satisfied and reassured regarding education.”