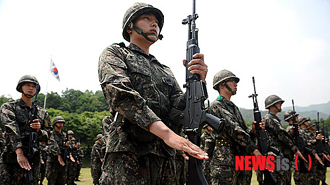 To mark the 45th anniversary of the failed raid by North Korean commandos to assassinate President Park Chung Hee, the Army’s Capital Defense Command is holding a 5-kilometer (3.1-mile) hiking event today and tomorrow on the route used by the would-be assassins.

“Even though the incident was a major attack that threatened the security of the capital of Seoul, the incident has been forgotten by many people today,” said an official from the defense command. “The event will allow Seoul citizens to walk along the path the commandos used as an infiltration route. Doing so will allow the people to be more aware of national security.”

On Jan. 21, 1968, 31 armed North Korean commandos invaded northern Seoul after crossing the military demarcation line several days before and attempted to enter the Blue House and assassinate then-President Park Chung Hee, the father of President-elect Park Geun-hye. They got as close as 800 meters to the presidential residence and office.

The incident, also called the Blue House raid, turned into firefights between the commandos and Southern soldiers in various parts of the capital. In the end, 29 commandos were killed, one was captured, and one made it back to the North.

Kim Shin-jo, who was caught alive the day after the raid near Mount Inwang in northern Seoul, later became a South Korean citizen after being released from jail and is now a Christian pastor in Seoul.

The course for the walking event, which will be held from 12:30 p.m. to 3:30 p.m. today and tomorrow, will start from Kyungbock High School in Cheongun-dong, Jongno District, and finish at Samcheong Park, located near Mount Bugak in Seongbuk District. The walkers will pass the Changuimun Gate in Buam-dong, where a statue of Choi Gyu-shik is located, the Baegangmaru, the peak of Mount Bugak, and a pine tree on Mount Bugak with bullet holes from the South-North skirmish.

Singer and actor Rain, whose real name is Jung Ji-hoon, will join the event on behalf of the Army. Rain is serving his compulsory military duty and will be discharged in July.