Lee Sang-hwa breaks her own record

Lee Sang-hwa breaks her own record 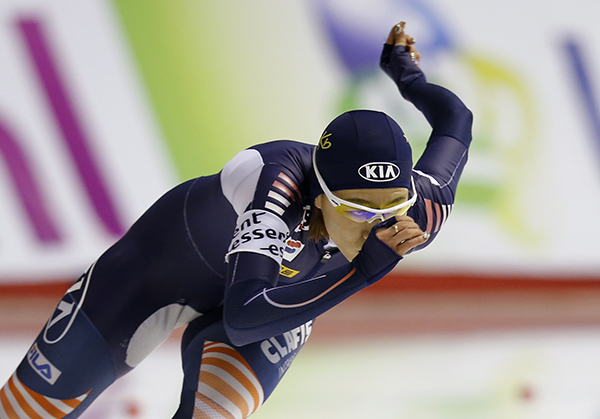 Lee Sang-hwa skates during the women’s 500-meter competition at the ISU World Cup speed skating event in Calgary, Alberta, on Saturday. She won it with a new Korean record only five-hundredths of a second shy of the world record. [REUTERS/YONHAP]

Lee finished the race with a time of 36.99, 0.25 second faster than the previous Korean record, which the 23-year-old skater set during the ISU World Cup in December 2009 with a time of 37.24 seconds.

The new time is only 0.05 second shy of the world record of 36.94 seconds set by Chinese skater Yu Jing last year. Yu, 27, set the record during the ISU 2012 World Sprint Speed Skating Championships in January of last year in Calgary, Alberta, becoming the first woman in the world to skate a 500-meter race in under 37 seconds.

During Saturday’s event, Yu finished behind Lee and came in third at 37.28 seconds, while American Heather Richardson, who won the women’s 1,000-meter event, finished second at 37.12 seconds.

This is Lee’s seventh World Cup victory during the 2012-13 season, and her success has brightened the prospects of defending the title during the upcoming Winter Olympics in Sochi, Russia.

She has been atop the World Cup standings with 700 points, putting the runner-up and former world record holder Jenny Wolf of Germany behind at a distant 436 points.

“Lee Sang-hwa’s heyday was not during the Vancouver Olympics, but now,” said Yoon Eui-joong, who coached the national speed skating team from 2011 until May. “At that time, her ankle was not good and weighed more than now. A heavy body can make you tire more quickly.”

Lee, who weighed 58 kilograms (128 pounds) ahead of the Vancouver Olympics, has cut that number by two or three kilograms while thickening her thigh muscles by one inch.

Her speed has improved accordingly from 10.4 seconds in the 100-meter segment to 10.31 seconds. Her best training record this season was less than 10.30 seconds.

“She has rivals such as Jenny Wolf of Germany and Yu Jing of China, but if she holds onto her current pace, I think there will be no opponent that can beat Lee Sang-hwa at the 2014 Sochi Olympics,” Yoon said. Lee, the first Asian winner in the 500-meter speed skating Olympic event, was one of two female gold medalists from Korea during the Vancouver Olympics. The other gold medalist, figure skater Kim Yu-na, also made an impressive comeback after a break of several months, raising expectations that Korean women will keep their dominance during the 2014 Sochi Games.

Their male counterparts, however, are struggling.

Mo Tae-bum, gold medalist of the men’s 500-meter speed skating event during the Vancouver Olympics, has failed to make it onto the podium this season. He came in a disappointing 16th at Saturday’s event at 34.99 seconds. Lee Kang-seok, a bronze medalist at the 2005 Turin Olympics, clocked in at 34.74 seconds to finish in ninth place.

Lee Seung-hoon, who won a gold medal at the men’s 10,000-meter event during the Vancouver Olympics, failed even to make the national team.