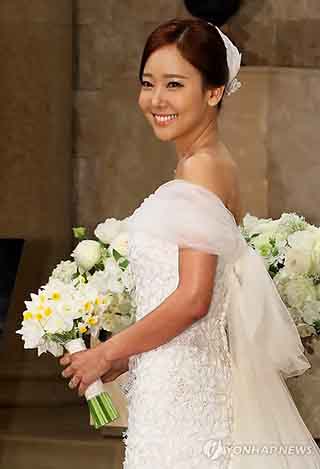 Just two months after she admitted they were dating, So Yu-jin, 31, married Baek Jong-won on Saturday, a restaurant entrepreneur 15 years her senior.

“I haven’t thought about the age gap that much,” So said at a press conference held prior to the wedding. “There is no generation gap. He has been nice to me.”

“Many people care about us, so I think we should show them how happy we will be,” So said.

Around 1,000 guests celebrated the wedding, which was held at a hotel in southern Seoul. Horan, a member of Clazziquai, received the bouquet from So. Horan is to set to have her own wedding in March.

So debuted in SBS drama “Virtue” in 2000 and has been cast in more than 15 television dramas since.

Her latest television drama, “Can’t Live Without You,” wrapped up its 110-episode run on MBC in November.

She has also appeared in three movies, all in the early 2000s.