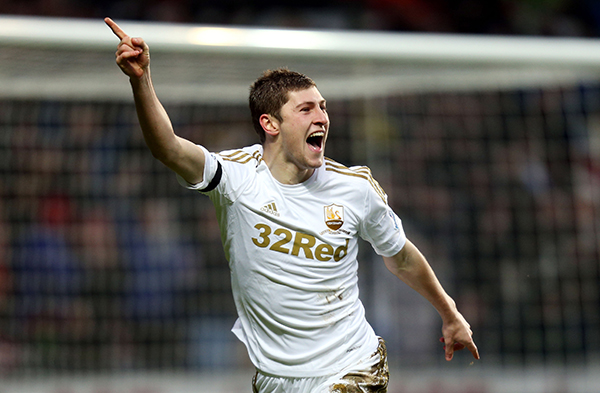 Michael Laudrup’s team couldn’t break through the visitors’ defense in the first half, but Ben Davies then netted his first goal for Swansea to put the hosts’ ahead in the 49th.

De Guzman doubled the lead with a curling free kick in the 57th and then added the third in the 80th. Michael Owen headed in his first goal for Stoke in injury time, but it was too late to prevent a confidence boosting win for Swansea ahead of its return leg against Chelsea in the League Cup semifinals on Wednesday.

Manchester City kept up its stubborn pursuit of Manchester United with a routine 2-0 win over Fulham on Saturday, with David Silva’s double reducing the champions’ deficit to four points in the Premier League title race.

The Spain playmaker secured City’s fourth straight league win by scoring in the second and 69th minutes for his first goals in two months, increasing the pressure on United ahead of its testing visit to Tottenham yesterday.

Liverpool thrashed Norwich 5-0 to revive hopes of qualifying for European competitions next season, with Luis Suarez and Daniel Sturridge striking up a good combination up front and both getting on the scoresheet at Anfield.

France striker Loic Remy scored on his debut for Queens Park Rangers, but a 1-1 draw at West Ham kept the club at the bottom of the standings, five points adrift of safety after Reading’s 2-1 come-from-behind win over struggling Newcastle and Aston Villa’s 2-2 draw at West Bromwich Albion.

QPR manager Harry Redknapp admitted his side needed to show more quality and composure if it is to win the battle to avoid relegation from the Premier League.

QPR scored with its only shot on target, when debutant striker Remy beat the offside trap after 14 minutes to run onto Adel Taarabt’s pass and slot home.

QPR is now unbeaten in five games, but Redknapp conceded it will have to improve in all areas to beat the drop.

In Spain, an injury-time strike from substitute Imanol Agirretxe condemned 10-man Barcelona to a 3-2 defeat at Real Sociedad on Saturday, its first of a record-breaking La Liga season.

Lionel Messi matched another landmark by scoring in a 10th consecutive La Liga game to put Barca ahead after six minutes with Pedro Rodriguez doubling the lead. AP, AFP