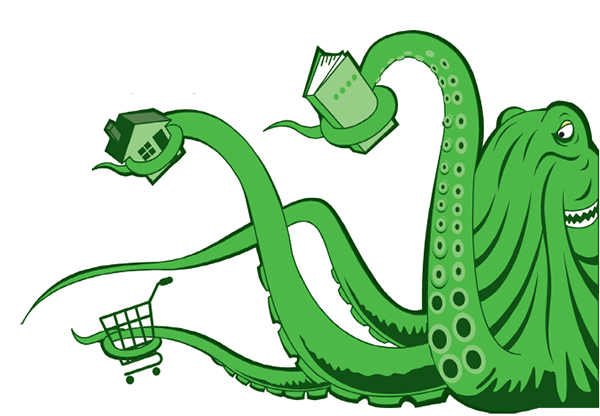 Naver, the nation’s largest portal site that has taken flak for its aggressive takeover of small online stores, is expanding its presence in the realm of online bookstores.

NHN, Naver’s operator, announced its plan to launch a “Naver Web novel” service which publishes and distributes serial novels online that are written by online writers this week. All novel genres, including fantasy, romance or martial arts, will be serviced for free through Naver’s Web site and an accompanying mobile app. NHN will pay the writers a fee and even publish e-book versions when the serial is completed.

It is a service that no other portal site - even Google, the world’s top search engine and portal - has offered thus far. 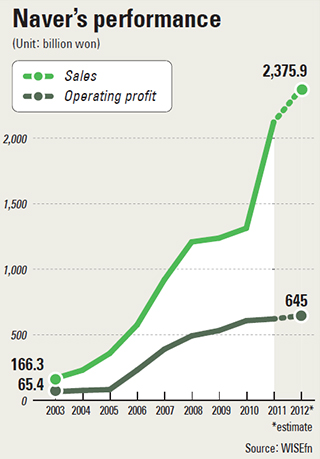 “We will contribute to distributing high-quality cultural content and provide a better creative working environment [for writers] as we give the public access to a variety of novel genres,” said Han Sung-sook, a Naver Service executive.

However, the plan is not being warmly welcomed by the industry as Naver can easily push smaller companies that service online books into bankruptcy, as has been the case in other business areas where Naver has expanded.

The portal giant has expanded its business areas from providing price comparisons of products to comics, shopping malls and housing price information based on its dominance in the local online market as it takes up more than 70 percent of local online searches.

Naver refutes the idea, arguing that it has helped smaller industries to grow bigger and enabled economies of scale, especially in the field of Web toons, or animated comic strips distributed via the Internet.

“Companies that publish novels online expect Naver to grow the market there just as it has previously contributed to making the Web toon market bigger after it started servicing comics,” said Han.

However, some experts in the e-book industry think differently.

“The situation is a little different here as the comic book industry has already been dying due to illegal downloads and copying [before Naver jumped in],” said one entrepreneur who runs a business that services e-books.

“Because the markets for Internet novels and e-books have already formed their own retail channels and created a range of regular subscribers, I’m worried that [subscribers] will get used to enjoying the book services for free [courtesy of Naver].”

Existing businesses have charged subscribers at least a couple of hundred won for each copy of a serialized novel. If Naver starts to provide the same service for free, industry officials point out that it will be hard for them to charge online readers in order to stay competitive.

“Once consumers get the idea that content is available free of charge, it will be extremely hard to convince them [to pay],” said another businessman who runs a publishing company.

Many online companies that distribute real estate information and tips on housing purchases went out of business after Naver started providing the same service for free, a fact that is not lost on e-book publishers.

Companies that derived their income from distributing information on the property market to small realtors soon found their revenue streams had dried up as the realtors were able to get the same information for free online through Naver.

But they also found out there’s rarely such thing as a free lunch.

“At first [Naver] did not ask for any fee, but now it is asking for higher advertisement fees [on its Web site] as it has almost monopolized the market,” said Moon Hong-gu, a realtor at Sangdo-dong in Dongjak district, southwestern Seoul.

Lee Chang-dong, a member of the communications team for the Korea Association of Realtors, said property agents have no choice now but to pay Naver if they want to access real estate information, regardless of the cost.

Naver’s shopping tips channel that provides information on product prices at various online malls also encroached on the business of smaller rivals like Danawa and eNuri.com. Naver’s “Knowledge Shopping” channel, the largest provider of product prices in the country, has three times as many online users as Danawa, the No. 4 player in the domestic industry.

Some of the retailers fought to curb Naver’s dominance, but to little avail.

EBay Korea, which operates two online shopping outlets, Gmarket and Auction, said in 2011 that it would not provide information to Naver about prices of products sold on its Web sites, but then retracted its decision within four months.

Open Market Shop N, a shopping outlet operated by Naver, doesn’t allow individual sellers to post their store links on other Web sites besides Naver, so sellers cannot promote their stores to the public unless they post ads on Naver’s Knowledge Shopping channel.

Although Naver is gaining the upper hand over many companies online, it is hard to regulate it in a way that would curb its expansion and prevent it from monopolizing online commerce.

“As Naver is not a telecommunications business, we would have to completely change the law to recognize it as a dominant player in the market,” said an official at the Korea Communications Commission.

Smaller online shopping companies say the law should be changed to limit the commercial activities of Naver.

“It is true that Naver is monopolizing the online world,” said an employee at one such online mall. “It should be categorized as an online conglomerate and regulated in an appropriate manner.”