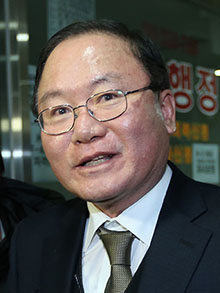 The largest opposition party uncovered yesterday more skeletons in the closet of the Constitutional Court chief justice nominee, while the ruling party is now worried that confirmation hearings on the nominee could jeopardize President-elect Park Geun-hye’s creation of a cabinet.

The National Assembly will have the confirmation hearings today and tomorrow on President Lee Myung-bak’s nomination of Lee Dong-heub, a 61-year-old former Constitutional Court justice, as the court’s new chief.

The opposition Democratic United Party has already vowed to kill the nomination and its lawmakers made public more allegations about him yesterday.

“A Constitutional Court justice is a ministerial-level official, so he is entitled to a first-class seat on an airplane for an official trip,” said lawmaker Park Beom-kye of the DUP. “But Lee downgraded his seat to business class and pocketed the difference.” Park said he’d confirmed the anecdote with Constitutional Court officials.

“A staffer who worked that deal for Lee said he felt mortified having to ask the airline company to return the money,” Park said. “This is so dirty. Lee should give up his nomination.”

Park alleged that Lee traded in his first-class seat on a visit to the United States in December 2008. The difference between first- and business-class seats for a round trip from Seoul and Washington is about 2.6 million won ($2,460).

Another lawmaker, Seo Young-kyo, said Lee pulled a similar trick on a trip to Germany in 2009.

Lee was provided an economy-class ticket from the host but upgraded his seat to business class and asked the Constitutional Court to pay the 4.12 million won difference, Seo alleged. “He, however, didn’t actually use a business-class ticket,” she said. “He just pocketed the difference.”

Representative Choi Jae-cheon said on a trip to France in 2010, Lee was accompanied by his wife. During the trip, the couple’s daughter joined them for a nine-day tour of Switzerland, Choi said. Of the nearly 19.3 million won of Lee’s travel expenses for the whole trip, more than 8 million won was for the Switzerland trip, he said.

The JoongAng Ilbo also learned that Lee went to Cancun, a resort area in Mexico, with his wife and daughter on the sidelines of the trip to the United States in 2008.

Lee said yesterday that the trip to Cancun was part of a “cultural inspection.”

The 13-member confirmation hearing committee is composed of seven Saenuri Party lawmakers, five DUP lawmakers and one Progressive Justice Party lawmaker. If the opposition lawmakers refuse to adopt the hearing report, the motion to confirm Lee cannot advance to a voting session unless the National Assembly speaker uses his power to introduce it directly.

If the confrontation between the ruling and opposition parties deepens, it could influence confirmation hearings for the new prime minister and cabinet members.

Lee yesterday admitted to some of the accusations made by the DUP such as using a false address and having given a political donation to a Saenuri lawmaker.

He denied character attacks and said he paid personally for the expenses of the family members who accompanied him on overseas business trips.

While the ruling Saenuri Party tried to defend the nomination, since it was made jointly between President Lee and President-elect Park, concerns grew that it would hurt the reputation of the incoming administration even before its launch.

But not everyone from the ruling party is confident about endorsing Lee.

“We cannot make a conclusion because the confirmation hearings haven’t been held yet,” said Representative Lee Cheol-woo. “But if any of the main accusations are substantiated, then it will be hard to confirm his nomination.”