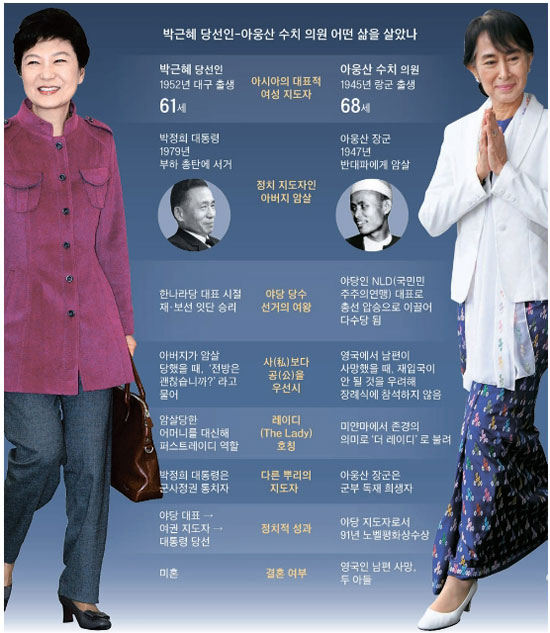 A spotlight is being trained on the similarities and differences in the two women’s family backgrounds, political careers and leadership styles.

Both Park, 60, and Suu Kyi, 67, are leaders who followed their fathers into politics.

Park, who was elected as the next Korean president on Dec. 19, is the daughter of former military ruler Park Chung Hee, who played a pivotal role in the country’s development and is considered the father of industrialized Korea.

Suu Kyi’s father, Gen. Aung San, was a revolutionary who contributed to Myanmar’s independence from British colonial rule and is considered the father of modern-day Burma.

The two women have also overcome tragic family histories that have contributed to their images. Park’s father was shot by his own security chief in 1979 five years after her mother was murdered in an assassination attempt against Park Chung Hee.

Suu Kyi’s father was also assassinated in 1947 by a paramilitary group in circumstances that are still not entirely clear. She was 2 years old at the time.

Both women are renowned for putting country above their personal interests. When Park’s father was assassinated, Park’s first reaction was, “Is the [country’s] front line safe?” When Suu Kyi’s British husband died in the United Kingdom in 1999, she refused to attend the funeral because she knew the junta would never let her return to continue her push for democracy.

Park and Suu Kyi also have differences: Korea’s president-elect is the daughter of a military strongman while Suu Kyi’s father revolted against military dictatorship. As for their political careers, Park was the head of a party that has alternated between ruling and being in opposition, while Suu Kyi is the head of an opposition that won an election in 1990 but was never allowed to take power. She spent most of the time since under house arrest for her fight to bring democracy to her country.

Park is single with no children while Suu Kyi is a widowed mother of two.