Taxi industry slugs it out over which fuel to use

Taxi industry slugs it out over which fuel to use

After the National Assembly amended the Act on the Support and Promotion of Utilization of Mass Transit System, better known as the “taxi law,” on New Year’s Day, the war over what fuels will be used by taxis in the future is beginning.

It pits the liquefied petroleum gas (LPG) industry, which currently has the taxi market to itself, against makers of diesel, who want to make inroads.

The Ministry of Land, Transport and Maritime said last month it is actively trying to diversify fuels used in taxis, a yellow signal to LPG producers and possibly a green light to diesel refiners.

There’s no law mandating that taxis use LPG. In fact, taxi operators can use any kind of fuels they want. 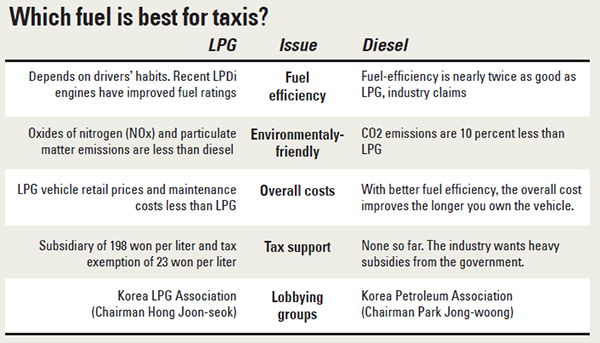 But since the government’s tax support only goes to users of LPG - a subsidiary of 198 won (20 cents) per liter and tax exemption of 23 won per liter - they had no other choice.

The government in 2011 spent a total of 560 billion won in subsidies for those LPG taxis.

The idea, which dates back to 2001, was a way of helping taxi companies, small businesses that used trucks, and even the disabled because LPG was cheap back then.

But with surging LPG prices, taxi drivers have been begging for a break, which eventually led to talk of adopting fuel efficient diesel taxis - including tax breaks.

No details have been announced on the kind of subsidies the government may offer on other fuels. But transport experts say the monopoly in the taxi fuel market may come to an end. 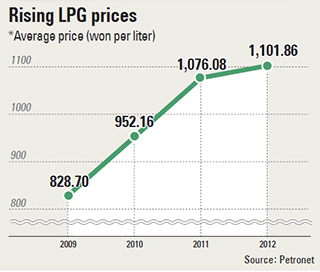 Diversifying fuels for taxis is in line with 300,000 cab drivers’ wish to get a better deal.

According to 2011 data from the transport ministry, the average monthly income of taxi drivers is 1.69 million won, roughly half that of bus drivers.

And the recent economy slowdown and surging LPG prices have made life worse for taxi drivers, which led them to a nationwide strike last year.

Although it is still cheaper than diesel, the average price of automobile LPG has been growing steadily since 2009. Last year, its average price was 1,101.86 won per liter, about 8 percent more than in 2011.

Taxi company owners have complained that fuel costs now account for more than 20 percent of their operation costs. Taxi drivers say they feel like they’re barely able to pay the bills.

“Raising the basic fare for taxis won’t help us much,” Kim Yong-soo, a cab driver in Seoul said. “But lowering fuel costs is really welcome since it allows us to move around much more efficiently.”

According to a recent survey by the Seoul Taxi Association, which has 255 taxi companies as members, 81 percent of cab drivers in Seoul say their vehicles’ low fuel efficiency is their most annoying problem.

“Drivers have shown their distrust in government-approved fuel ratings on their taxis since real time measures are different,” said Lee Sang-taek, a manager at Seoul Taxi Association. “Eight out of 10 companies also have answered that taxi fuels should be diversified.”

In the survey, taxi drivers selected compressed natural gas (CNG) and diesel as their top two preferred fuels. CNG was chosen by 31.3 percent of the respondents, followed by diesel at 30.5 percent. Only 16 percent of Seoul taxi drivers answered that they still prefer LPG.

Transport experts said that CNG, which is mainly used for buses, is an ideal alternative fuel for taxis because it offers better fuel efficiency and is less expensive than LPG.

However, the government and other analysts don’t like CNG for taxis, citing safety reasons - mainly the risk of explosions - and a lack of infrastructure.

At present, no local automakers mass produces CNG-fueled passenger cars. In order to have a CNG-fueled car, drivers have to pay an average of 4.3 million won to refit their vehicles according to the transport ministry.

There are some local governments, such as Daegu’s metropolitan government, that offers subsidies to taxi drivers who remodel their existing LPG taxis to CNG, but a lack of CNG stations remains a big road block.

According to the Korean Association for Natural Gas Vehicles, there are about 300 CNG stations nationwide. That is one-seventh the number of LPG stations and 60 times smaller than the number of gas stations in Korea.

If you remove CNG, the taxi fuel war is mainly between LPG and diesel.

Energy industry insiders estimate that the size of the local taxi fuel market is 2.5 trillion won, considering roughly 2.8 billion liters of LPG are consumed a year.

On the LPG side, which includes companies like E1, taxis are the most important customers accounting for 40 percent of total transportation-use LPG consumption.

The LPG industry is aware that diesel-fueled taxis will further damage its business.

The Korea LPG Association (KLPG) claims that a diversification of taxi fuels will be a disaster for its industry. The business group estimates that if half of taxis in Korea change to diesel, the average sales of LPG stations will plunge 20 percent and that will lead to closures.

Meanwhile, oil refiners, backed up by Korea Petroleum Association (KPA), have been trying to enter the taxi fuel market following the expansion of their high-tech refineries, which can produce better quality diesel.

With a surplus of local supply, oil companies have been exporting diesel overseas, so taxis would be a welcome new customer.

The KPA claims that the adoption of diesel taxis would benefit the nation’s fuel supply and demand, because unlike diesel, LPG is imported from abroad.

The clash between the energy sectors became a hot issue in 2011 when the National Assembly’s Clean Diesel Forum, led by then-Saenuri Party lawmaker Lee Myung-gyu, held a symposium saying that diesel taxis are better than LPG taxis.

Lee proposed a bill to allow the government to give subsidies to diesel, but it failed to pass.

A similar bill that asked for a revision in the special tax treatment control act, was proposed by Ahn Min-suk of the United Democratic Party last August.

The debate over which fuel is best for taxis has never reached a conclusion as study results vary even inside the government.

Diesel supporters opened fire first in 2011 based on data from the Korean Institute of Machinery & Materials (KIMM), an organization that is under the Ministry of Knowledge Economy.

“Clean diesel has 10 percent fewer Co2 emissions than LPG, which will help prevent the greenhouse effect,” Jeong Dong-soo, the head of the Green Car Research & Development Center at KIMM, said in his report. “The fuel efficiency of diesel is also two times better than LPG.”

Jeong said that his data came from tests of five Hyundai Motor i40 diesel taxis in Daegu. Although diesel prices are higher than LPG prices, he claimed that if the government subsidiary went to diesel, diesel taxis would save more money than LPG taxis.

KLPG said the result lacks credibility since the research was based on tests of diesel taxis over two weeks. It also claimed that the research omitted the fact that the price of a diesel taxi is 2 million won more than an LPG vehicle.

In terms of environmental friendliness, the KLPG said that considering that diesel cars discharge large amount of oxides of nitrogen and particulate matter, LPG was still a better fuel.

“They [diesel supporters] have been marketing themselves cleverly by using the term ‘clean diesel,’?” an official from the KLPG said. “Considering that taxis are in congested traffic most of the time, the durability of diesel particulate filters also raises a question.”

The LPG industry recently fought back with data from the Korea Automotive Technology Institute (Katech), which conducted research after receiving orders from the Ministry of Environment.

Under Katech’s report, which was released last October, the cost of tackling problems to the environment caused by diesel taxis is much higher than for LPG taxis because’ diesel vehicles’ nitrogen emissions - a main cause of acid rain - were 50 times higher than that of LPG taxis.

In addition, Kitech said when calculating the fuel costs, vehicle prices and maintenance costs for six years, the average life of a taxi, diesel taxis will eat up 20 percent more in fuel costs than LPG taxis.

Conspiracy theories have also been spreading behind the scenes.

The LPG side suspects that oil refiners have been lobbying politicians aggressively since the current KPA Chairman is Park Jong-woong, a former three-term lawmaker.

As the mud flies in the fuel industry, local automakers have been staying neutral.

Hyundai Motor Group, the nation’s largest automaker and whose vehicles account for nearly 80 percent of the taxis in Korea, has been maintaining a relationship with both sides.

For diesel taxi supporters, Hyundai emphasizes that its produces the i40 Diesel. The midsize station wagon is described as the only local model that can be converted to a diesel taxi.

“What led to this situation is that the taxi fuel market has been a monopoly,” said Kim Pil-soo, a professor of automotive studies at Daelim University College. “The government should first set clear standards and add flexibility into its energy policy by increasing competition.”

Others hope that the fuel dispute sparks competition in other areas such as taxi models, services and fares.

“I think the fuel diversification issue is just a small part of the industry’s effort to upgrade itself to the next level,” said Kang Sang-wook, a researcher at the Korea Transport Institute.

“Add diversity to the taxi business and let consumers choose for the best,” he said. “The market will eventually filter out what’s right for the industry and the country.”