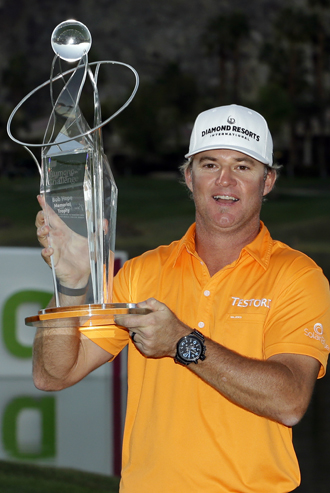 Gay, 41, sealed victory in fading light on the Palmer Private course at PGA West after striking a superb approach to five feet at the par-four 10th, the second extra hole and coolly sinking the birdie putt.

Howell, bidding to claim his first title on the U.S. circuit in six years, bogeyed the hole after ending up in the back left bunker in two, splashing out to nine feet beyond the pin and missing the par putt.

PGA Tour rookie Lingmerth was eliminated at the first extra hole, the par-five 18th, where he bogeyed after hitting his second shot into water. Howell, with a solid two-putt, and Gay, who chipped to four feet, both birdied the hole.

“It feels amazing,” Gay told reporters after securing the winner’s check for $1.008 million and a two-year exemption on the PGA Tour. “I’m still in a little bit of shock. It kind of happened so fast there at the end the way things went down.”

The trio had finished the 72 regulation holes on 25-under-par 263, Howell signing off with an eight-under 64, Gay carding a 63 and Lingmerth matching the day’s best score with a 62.

American Scott Stallings, five strokes in front overnight, bogeyed the par-five last after hitting his second shot into water to drop out of the lead for the first time in the final round, finishing with a 70 in a tie for fourth at 24 under.

“There weren’t any nerves or anything like that going into it,” Stallings said about his wayward six-iron approach at the 18th. “Just hit a bad shot. Felt like I made a good swing, just the ball .?.?. got a bad kick and went in the water. But it is what it is.”

Stallings faltered at the seventh with a three-putt bogey, his par putt from inside two feet catching the left edge of the cup and spinning away for his lead to be cut to two strokes.

Stallings then failed to take advantage of the drivable par-four eighth, chipping from greenside rough to three feet before again lipping out. After parring the ninth to reach the turn in two-under 34 with a one-shot cushion, he birdied the 10th and 11th to stay a stroke in front of the chasing Gay.

Stallings bogeyed 16 to drop back into a tie for the lead with Gay, Lingmerth and Howell.

After safely parring the 17th, Stallings struck a perfect drive down the 18th fairway but then stunningly pulled his approach into the lake guarding the left side of the hole, winding up with a bogey to finish a stroke outside the playoff. Reuters