VIPs may shunt BRICs aside

VIPs may shunt BRICs aside 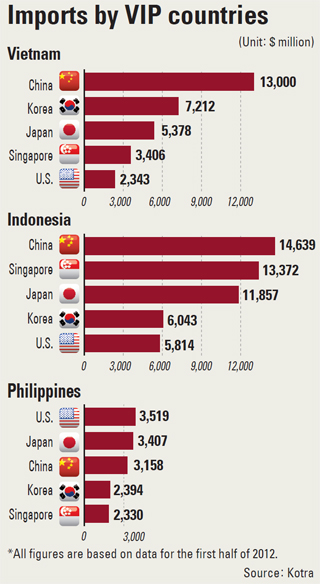 Vietnam, Indonesia and the Philippines, the triumvirate of emerging nations to which the latter acronym refers, are shaping up as major markets for Korean exporters while the dominance of the BRIC quartet of Brazil, Russia, India and China is fading, the Korea Trade-Investment Promotion Agency (Kotra) said.

The three countries are relatively new markets and their growth potential is expected to keep rising in the coming years. Foreign investment in them is also increasing at a rate of five to six percent a year despite questions about political stability and social security, the report said.

According to a survey conducted at the World Economic Forum in 2012, the Indonesian government was found to be more productive than its counterparts in China, India and Brazil in terms of business support.

The Philippines is expected to see its GDP grow at a healthy rate of seven to eight percent a year for at least the next few years, owing to the government’s efforts to combat corruption and tax evasion.

The Kotra report said that while the VIP countries are just starting to grow, those in the BRIC category are already seeing their growth levels fall, making the former a better bet for local exporters.

The newly emerging countries are in great need of infrastructure for urbanization, in which Korean businesses can excel, it said. The report took Indonesia as an example, saying the country will need to build large cities that can each accommodate between 2 million and 5 million people over the next few decades.

“It is also significant that the countries are located next to China,” the report noted. Currently, Korean-made goods are being sold in import markets in the three countries at about half the volume of rival Chinese goods, according to data provided by Kotra.

To gain an edge in the three markets, exporters need to focus on each country’s infrastructure and resource development plans, the report said.

“Although Korea has a free-trade agreement with ASEAN countries, it will need separate deals with each one to forge closer partnerships,” said Bae Chang-hyun, chief of the agency’s global information division.