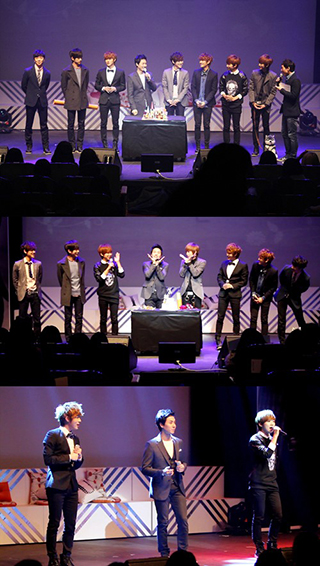 Shinhwa’s Andy treated fans to a fan meet on Jan. 20, a day head of his birthday.
At the “Happy ANDY’s DAY!” event which took place at Baekam Hall in Samseong-dong, southern Seoul, fans got more than they bargained for when 100% arrived on the scene.

The new boy band which belongs to the agency headed by Andy himself, had some gifts for Andy too.
Andy, who turned 32 years old yesterday, was asked to draw out coupons which were gifts from the boy band members.

Andy picked “Changbum’s Cutie Performance,” “Rokhyun’s Kiss” and “Minwoo’s Nail Art.”
The former boy band member seemed a little embarrassed with his win, much to the amusement of fans.
He also treated fans to a sneak peak of his new single “You & Me” which was officially released the next day.