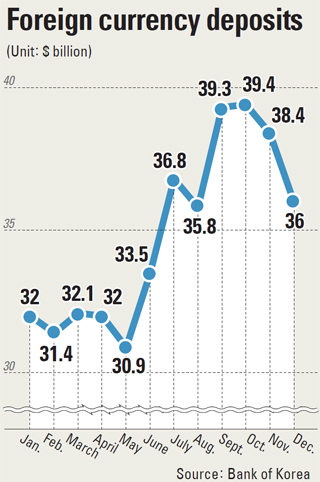 Korea’s foreign currency-denominated deposits peaked in October but shed over $3.3 billion by the end of the year, with stimulus measures by major developed economies, a strengthening Korean won and the nation’s low-interest-rate policy cited as major causes.

Local companies have been rushing to sell off their dollar holdings in recent months to minimize their losses as the won keeps getting stronger.

According to the Bank of Korea, foreign currency deposits held by Koreans or expats and corporations that have lived in the country for a year or more peaked at $39.3 billion in October. The total figure dropped to $38.2 billion in November and $36 billion in December.

This curtailed a four-month rising trend that began in June when the government announced a measure aimed at stabilizing the foreign exchange market.

By offering various incentives, the government was hoping to encourage companies and individuals alike to increase their foreign-currency deposits so these would account for more than 10 percent of the nation’s total deposits in the long run.

The aim is to shore up deposits to guard against a possible exodus of foreign investors in times of crisis and avoid a repeat of what happened during the IMF crisis in 1997. The same kind of defensive measure also proved a good insulator against disaster during the 2008 global credit crunch.

In the four months after the measure was introduced last year, foreign currency deposits jumped more than 17 percent.

However, the situation changed when major economies began flooding the market with their currencies as the risk of another global recession loomed. Europe, U.S. and Japan continued to extend a record-low interest rate policy while expanding their respective bond-buying plans.

In pursuing such moves, the U.S. Fed helped the Korean won further appreciate to around 1,100 won against the greenback. While this made local companies’ exports more expensive, most considered the level of pressure it added to their business transactions manageable.

However, after newly installed Japanese Prime Minister Shinzo Abe began putting pressure on the Bank of Japan to increase its monetary stimulus actions by vowing to print as much of the Japanese currency as needed in order to depreciate the value of the yen, the won once again began to climb.

As a result, in the last two months of the year companies’ foreign deposit holdings shrank $3.5 billion. Companies account for nearly 89 percent of the foreign currency deposits at Korean banks. In contrast, the amount of foreign currency held by individuals edged up slightly to $4 billion.

As of December, dollar-denominated accounts stood at $29.7 billion, making up 82 percent of the total foreign currency deposits, while the euro took up 9.4 percent ($3.4 billion). Those deposited in Japanese yen made up 5.4 percent ($1.9 billion).

The deposits are unlikely to rise anytime soon, according to industry experts.

Kim Choong-soo, the central bank governor, said the BOK will take action if it is necessary to normalize the exchange rate. Kim left yesterday to attend the World Economic Forum in Davos, Switzerland, this week.

However, even the impact of intervention by the central bank will likely be limited as the recent move by the Japanese government to devalue the yen is sparking a new currency war on a global scale.

“This week the Korean won will likely remain in the 1,050 won range as traders keep an eye on the outcome of the BOJ’s monetary policy meeting scheduled to be held today,” said Hong Seok-chan, an foreign exchange analyst at Daishin Economic Research Institute