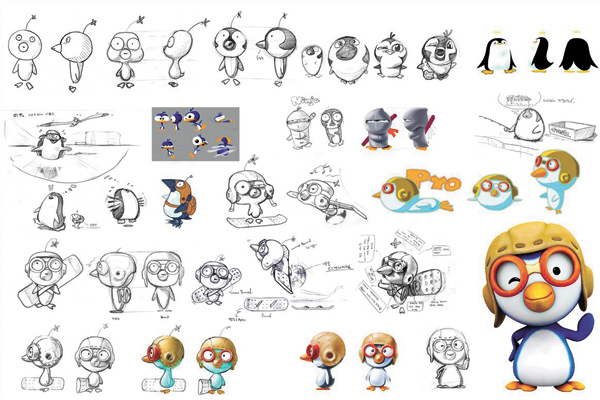 The sketches above show how Pororo the Little Penguin evolved over time. The final version is depicted in the bottom right corner. [JoongAng Ilbo]


Pororo the Little Penguin is returning to theater screens this week, but concern is growing over how much money the nation may lose as the popular Korean animation is spread via illegal distribution channels, especially in emerging Asian nations.

Few in the industry expect “Pororo, The Racing Adventure” will fail to mesmerize fans in Korea and around the world - even President-elect Park Geun-hye attended a preview of it last week - but the problem is that not enough may watch it on “legal” channels. 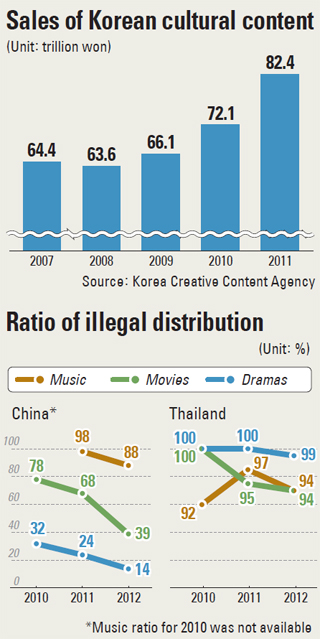 The Korean government’s efforts to rein in the illegal distribution of creative content like music, movies and TV dramas has borne fruit in China, but it is having little impact elsewhere in Asia.

The government failed to collect about 1.5 trillion won ($1.41 billion) in copyright taxes that were properly owed but never paid due to infringements in the distribution of local music, movies and dramas in Korea in 2010.

That same year, its total sales losses due to piracy of cultural content amounted to an estimated 39 trillion won, according to the Korea Copyright Commission.

In response, the local copyright watchdog has rolled up its sleeves to prevent further profit seepage as K-pop gains traction overseas and the renascent Korean Wave keeps washing over foreign shores.

While the illegal distribution of Korean cultural content has dropped significantly in China recently, however, the government is struggling to even calculate the size of the black market in Thailand, the Philippines and Vietnam.

“The Chinese government has shown a strong will to participate in rooting out copyright infringement and sign international treaties to stamp this out,” said Nam Sung-hyun, an official at the Korea Copyright Commission. “But the situation is different in southeastern Asian countries as they lack sufficient copyright laws and means of enforcement.”

This makes it hard to investigate suspected cases of infringement unless there are reports from members of the public or tourists.

The government assumes these underground economies are growing as the number of legal consultations regarding the copyrighting of Korean cultural content almost quadrupled from 215 cases in 2007 to 784 in 2011, according to the commission. However, this could just be the tip of the iceberg of total transactions as the consultations only concern online trade.

According to the Korea Creative Content Agency (Kocca), almost 20,000 singles, albums and music videos were sold illegally on 15 Web sites in Thailand in 2011 alone.

“As we are unfamiliar with the logistical operations of the Southeast Asian retail industry, we don’t know which groups or organizations are circulating such content without the consents of the creators,” said one local industry source, adding that organized criminal groups are suspected of being involved.

Although the government’s reach can be limited, it opened its sixth overseas copyright center in Vietnam last month to curb the number of illegal downloads.

Korea has two offices in China - it opened one in Beijing in 2006 and another in Shanghai in 2010 - one in Bangkok and one in Manila.

Kocca says if it can halve the number of copyright infringement cases so that just represent 10 percent rather than 19 percent of all such trades, the economic effect would be equivalent to creating 17,000 jobs and saving losses of 1.9 trillion won a year.

As recently as 2007, almost all Korean dramas circulated in China, or 91 percent, were done so illegally. However, this alarming rate dropped to 24.7 percent in 2011 as the number of Web sites circulating Korean-made content illegally fell from 59 to 28.

Whenever one of Korea’s copyright centers in China is tipped off about cases of illegal distribution it contacts Web sites operators and explains what disadvantages lie in store for them unless they delete the controversial content.

The Chinese government has also helped by playing ball. It settled over 1,150 online copyright infringement cases in 2011, the highest number since it launched the investigating committee in 2005.