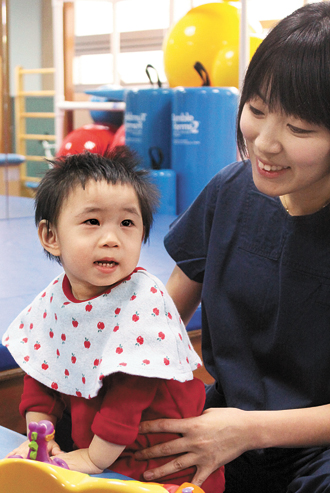 Two-year-old Jeong Ye-won, who was born with cerebral palsy, hoists herself up during rehabilitation after an umbilical cord blood stem cell infusion last year, at the Bundang CHA Medical Center in Seongnam, Gyeonggi, on Wednesday. Provided by the hospital

A team of Korean researchers successfully has treated cerebral palsy through transplanting stem cells from umbilical cords for the first time in the country.

“My daughter could not sit upright,” said Sohn Geum-ok, the 38-year-old mother of 29-month-old toddler Jeong Ye-won. “But isn’t it a miracle to have her hold her mother’s hand and walk?”

Ye-won was born with cerebral palsy, a leading cause of early childhood disability which limited her nervous system functions and motor capabilities. Nearly a year ago, in February 2012, Ye-won received a cord blood stem cell infusion from a donor.

Stem cells from a newborn’s umbilical cord are rich in blood-forming stem cells usually found in the bone marrow, and cells that can form muscles, cartilage, bones and nerves.

One month after the treatment, Ye-won began to use her right hand more frequently and gained complete use of her thumb and index finger. She could hoist herself up and stand for over 10 minutes. Before, she could barely sit up for 30 seconds. She began to show higher understanding of speech.

“Her hands were curled up, and she could not spread them out, but now, she can pick up crackers to eat,” said Sohn, watching over Ye-won who was standing up during rehabilitation at the Bundang CHA Medical Center in Seongnam, Gyeonggi, on Wednesday.

Dr. Kim Min-young of the Bundang CHA’s Rehabilitative Medicine Department, and her team of researchers, received permission from 31 cerebral palsy patients between the ages of 10 months and 10 years for a clinical trial in May 2010.

These patients were infused with umbilical cord blood stem cells for treatment in a placebo-controlled, double-blind study.

The results were published last month on the Web site of international science journal Stem Cells on Dec. 24.

Six months after the treatment, the patients showed improvements in posture, physical activities and abilities and cognitive capabilities, the research team revealed.

Kim stated, “A method of treatment has been made possible even for cerebral palsy patients who do not preserve their own umbilical cords through finding other compatible umbilical cords.”