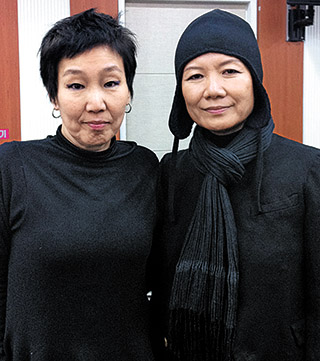 Kim Seung-duk, left, commissioner for Korean exhibition at the 2013 Venice Biennale, poses with artist Kimsooja, who will represent the Korean pavilion during the biannual art show. [YONHAP]

Kimsooja, one of the best-known Korean artists on the international scene, has been chosen to represent the Korean pavilion at the 2013 Venice Biennale from June 1.

The selection of the well-established 55-year-old artist, rather than a younger emerging talent, reflects curator Kim Seung-duk’s will to use more dependable work in the pavilion, which has a notoriously challenging design.

“I thought about an exhibition of nonmaterial art for the Korean pavilion, which is made of various materials including glass, metal and wood, and has curved walls,” Kim told reporters at the Arko Art Center of the Arts Council Korea on Daehangno in central Seoul last week.

“Then, I concluded that Kimsooja is the right artist for the job, as she is talented in using nonmaterial elements such as light, sound and color in her work.”

Arts Council Korea manages the Korean pavilion of the Venice Biennale, one of the world’s oldest and most important contemporary art events. The biennial consists of a main international art exhibition and shows at national pavilions. Last summer, the council appointed Kim, an independent curator, as the commissioner for the Korean pavilion for 2013.

“Given the pavilion’s transparent qualities and unique location, I will fill it with a site-specific installation using light, sound and color,” Kimsooja said at the press conference. “Viewers’ bodies will be mediums that connect the work and the recognition of the work in their minds.”

“The theme of the work will be related to natural disasters now frequently occurring around the world,” she added.

The artist presented work at the Venice Biennale’s international exhibition in 1999 and 2005, but this is the first time she has been invited to represent the Korean pavilion.

She won fame with the 1997 performance and video “2,727 kilometers Bottari Truck.” For the work, she traveled throughout Korea for 11 days on a truck loaded with bottari, a Korean traditional cloth bundle used to carry belongings. She presented the bottari truck at the 1999 Venice Biennale.

Another work representative of the artist is “A Needle Woman,” a series of performances and videos made from 1999 to 2001.

The videos show Kim from the back standing in the middle of a main street in various cities with crowds of people continuously passing by. She presented it in the 2005 Venice Biennale.