Time for the DUP to flog itself

Time for the DUP to flog itself 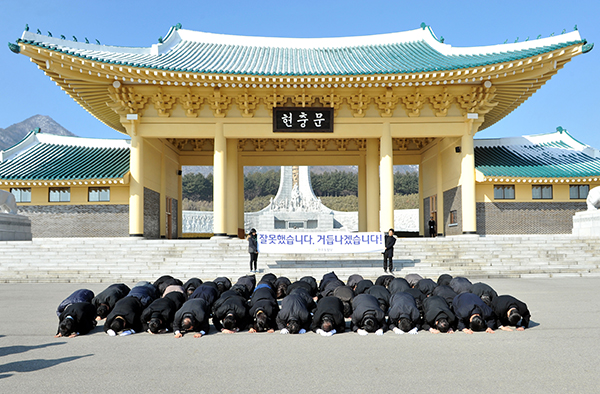 Personally, the most notable thing from the December presidential election was the outcome in five districts. These areas are where “major battles” took place during the five years of the Lee Myung-bak administration. The first is Ongjin County, Incheon, which includes Yeonpyeong Island, which was shelled by North Korea in 2010 and where the Cheonan warship sank due to a North Korean torpedo attack in the same year. There, Park Geun-hye earned 72 percent of the votes, the highest percentage outside the Yeongnam (South and North Gyeongsang combined) region. This came as the Northern Limit Line controversy arose during the campaign.

Next is Yeongdo, Busan - where the labor strife-stricken Hanjin Heavy Industry is located - and Pyeongtaek, Gyeonggi, where Ssangyong Motor staged strikes. Park won easy victories in both places. The fourth is Yongsan District, Seoul, where the forced removal of local residents for a redevelopment project caused tragedy. Here, Park received 52.33 percent of the votes, winning the only district in the Gangbuk region.

Last is Seogwipo, Jeju Island. Prime Minister Kim Hwang-sik said he was most anxious about this region. The Gangjeong Naval Base - symbolized by vehement candlelight protests - is located in Seogwipo city. Prime Minister Kim put all his efforts to resolve the discord. Seogwipo is a traditional stronghold of the opposition, and the Saenuri Party had lost in the four consecutive general elections. In the April 11 general election, the Democratic United Party had an overwhelming victory. In the presidential election, however, Park won five percent more votes. Though she was behind the opposition rival by a slim margin, her dominance in Seogwipo led to an overall victory on Jeju Island. The voters residing near the naval base favored Park’s “civilian-military combination tourism port” rather than Moon’s “immediate suspension of construction.”

In Korean society, when a regional issue is elevated to the national level, it is often refracted through a political prism. Opposition politicians would be first to arrive at the scene, followed by the Hope Bus and an expedition of protestors. The out-of-towners would cry out “opposition for the sake of opposition,” and when the excitement dies out, they would leave at once. However, local residents are different. As they observe the process at the closest distance for a long time, they know the truth of the crisis better than anyone. And the voters of the five key regions turned away from the opposition.

After the election defeat, the DUP is working hard to rehabilitate. Starting with a visit to Seoul National Cemetery, the opposition politicians are touring the country to apologize to voters. But the DUP should reflect on itself first. Even though they are preoccupied with the issues of welfare and economic democratization, why are they insisting on the unwieldy “democratic vs. anti-democratic battle” or the “Park Chung Hee vs. Roh Moo-hyun” framework in every election? It may reflect the deep-rooted activist sentiment of the pro-Roh Moo-hyun and 486-generation lawmakers.

The 486 activists are now two-to-four-term veteran legislators. Some have been elected mayors and governors. But the middle-aged lawmakers are dimming rapidly. Some of them are reportedly so into golf they have grown distant from the public. Others flew to Spain for a 40-day Santiago pilgrimage after losing the general election. You are mistaken to consider them as a pure, united group. They are divided into the pro-Roh faction, Kim Geun-tae faction, Sohn Hak-kyu faction and Chung Sye-kyun faction. Now, they are worthy of the shameful title of “life-time politicians,” and the activists have already become part of the establishment.

At this rate, the DUP may be able to win minor battles, but not a war. It lost the five major battlegrounds in the presidential election. We cannot completely ignore the “aging effect.” Voters grow more conservative as they get older. Moon Hee-sang, the DUP’s emergency leader, said, “We will change everything except for the 60 years of history as a legitimate opposition.”

We will see if they can really change. The ruling Saenuri Party noticeably reshuffled for general elections as the pro-Park and pro-Lee Myung-bak factions clashed. But the opposition party can hardly free itself from criticism that it still sticks to its coveted principle of sharing power among the factions. It is about time the party disciplines itself. God always presents his best gifts wrapped in pain.


*The author is an editorial writer of the Joongang Ilbo.