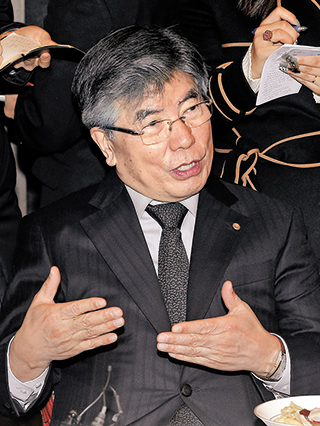 Bank of Korea Governor Kim Choong-soo reveals his upbeat view on the pace of economic recovery at the central bank while meeting corporate CEOs yesterday. [YONHAP]

Recent macro-economic indicators have given some of the nation’s top economists reason to believe the nation is on a fast recovery track.

Finance Minister Bahk Jae-wan said as much yesterday by pointing to the fact that a leading economic indicator of future exports by the Organization for Economic Cooperation and Development has hovered above 100 for seven straight months.

“The OECD index foresees our exports two to four months ahead, so exports are likely to continue rebounding throughout the year,” Nam Byung-hoon, an official at the ministry said, adding that the figure for exports this month is expected to be even higher.

The Ministry of Strategy and Finance maintains a position that the first half of 2013 will be harder than 2012 due to remaining risks in the global economy. Earlier this month it lowered its outlook for annual GDP growth to 3 percent from 4 percent.

Bank of Korea Governor Kim Choong-soo has also hinted at an earlier-than-expected recovery.

“The Korean economy has moved another step away from crisis,” said Kim at a meeting yesterday.

His remarks contrast with the latest revision of the central bank’s economic outlook, which it released on Jan. 11. The BOK predicted GDP will grow 2.8 percent this year, down 0.4 percentage point from its projection three months earlier.

The surprisingly optimistic remarks are based on positive signs of global recovery, including improved indicators in the U.S. and China.

But Bahk cautioned against over-confidence as external risks remain.

“Recent economic trends can be described as comparable to a ‘gray swan,’ meaning a situation where things are fairly predictable but clear solutions have not yet come into sight,” he said.

The World Economic Forum recently announced a report on global risks that lie ahead this year. It contains over 50 long-term risks for the global economy including income gaps and chronic fiscal imbalances in various countries.

On the flip side, however, China saw its GDP growth rebound in the fourth quarter after two years of declines. It grew 7.9 percent from the same period one year earlier.

The U.S. government said unemployment fell to a five-year-low in December, and the number of newly built apartments hit a 4.6-year high.

Japan, now at odds with a number of countries due to its recent quantitative easing and low-yen policy, is also seeing signs of improving consumer sentiment. Its retail sales are starting to inch up for the first time in 16 years.